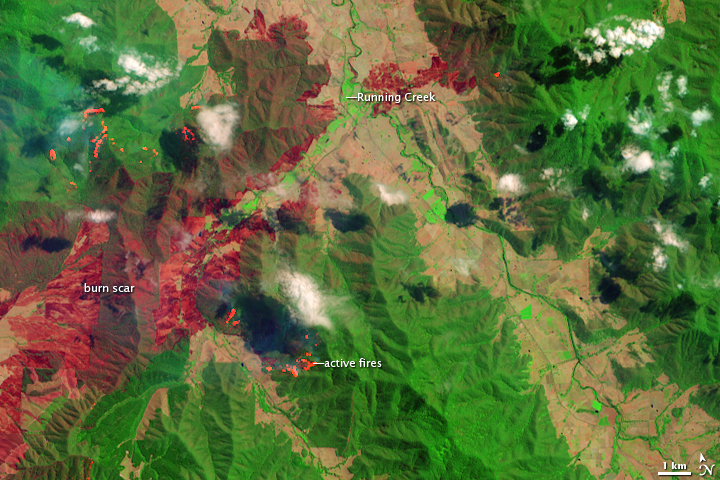 Although most of the deadly bushfires that ravaged Victoria in late January and early February 2009 burned in the area between Melbourne and Lake Eildon, devastation also came to more northern parts of the state. This false-color image from the Advanced Land Imager on NASA’s Earth Observing-1 satellite shows part of the 30,700-hectare (75,861-acre) Beechworth Fire—which killed at least two people according to ABC news reports—on February 10, 2009. Unburned vegetation is bright green, while burned areas are dark pink. The bright pink areas are often a sign of open flame in this type of image. The small town of Running Creek was threatened by the fire, but seems to have been spared; a burn scar brackets the town, but does not penetrate it.

According to reports from the Victoria Department of Sustainability and the Environment on February 14, the Beechworth Fire was about 85 percent contained. Some isolated pockets were still burning in steep, rugged terrain, but they were not posing a threat to any of the small communities in the area. In addition, firefighters were conducting extensive back burns as they brought the fire fully under control.

Among the remaining fires still listed as “going” in the February 25 fire status report from the Victoria Department of Sustainability and the Environment was the 158,000-hectare (390,425-acre) Killmore East-Murrundindi North fire. This image of the fire was captured on February 25.