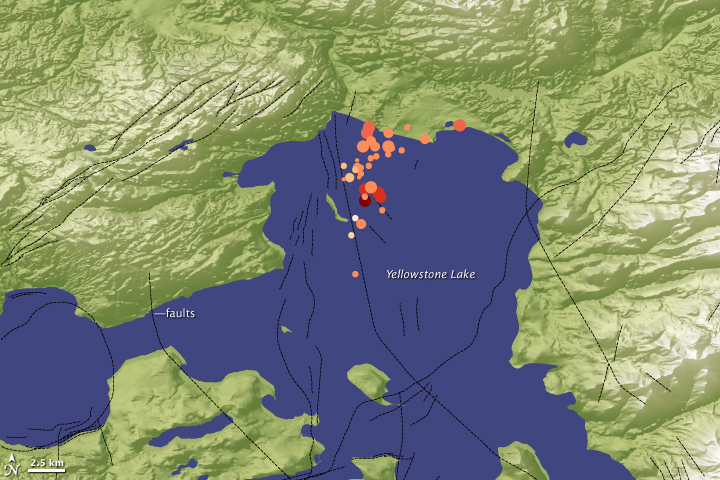 This image shows the topography of Yellowstone Lake and the location of quakes that occurred between December 29 and January 6. The size and color of the dots indicate magnitude and date. Bigger dots indicate stronger quakes, and darker dots indicate earlier quakes. The swarm began in late December near Stevenson Island, and quake locations migrated north in the days that followed. Magnitudes in this earthquake swarm ranged from 0 to 3.9. (People usually do not feel quakes that are smaller than magnitude 3.5, and magnitudes must generally reach 5.0 to damage buildings.)

Geology at Yellowstone is complex, and earthquakes can have multiple causes. Numerous faults (locations traced by gray lines on the image) crisscross the area, and earthquakes occur when the ground moves along these faults. In addition, the movement of magma more than 7 kilometers (4 miles) below ground causes other earthquakes. A third earthquake trigger is the area’s well-known hydrothermal activity. Groundwater is heated to boiling by magma, and the heated water rises and expands, often explosively.

The Yellowstone caldera began a period of accelerated uplift in 2004. For a time, the ground rose 7 centimeters per year (2.7 inches/year)—three times as fast as any rate in recorded history. Computer models link the uplift to the recharging of the magma chamber about 10 kilometers (6 miles) below ground. However, the rate of uplift has since slowed to a maximum of 4 centimeters per year, and the Yellowstone Volcano Observatory’s Website states, “At this time, there is no reason to believe that magma has risen to a shallow level within the crust or that a volcanic eruption is likely.”