Fires in the Northwest US 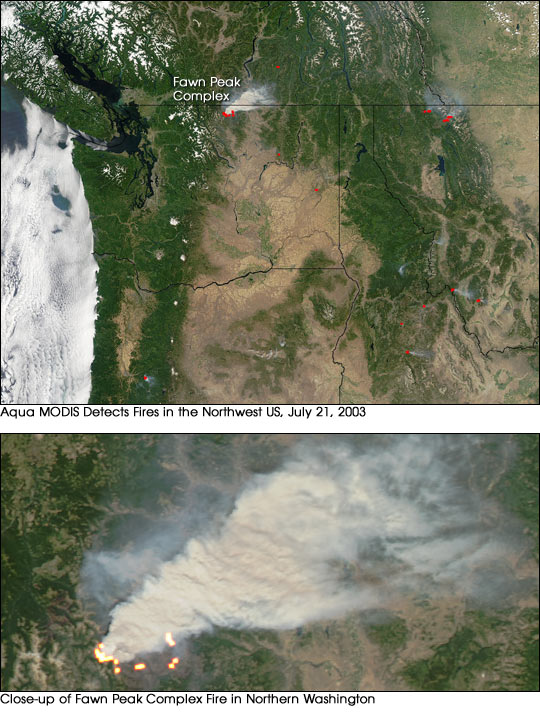 On Monday afternoon, the Moderate Resolution Imaging Spectroradiometer (MODIS) on the Aqua satellite detected several large fires (marked with red outlines) burning across the Northwest United States. The largest of the fires in the scene is the Fawn Peak Complex Fire in northern Washington.

This complex consisted of three fires—the Fawn Peak, Farewell Fire, and Sweetgrass Fire—that were started by lightning on June 29, 2003. By July 16, the Fawn Peak and Sweetgrass Fires were under control, but the Farewell Creek Fire continues to grow rapidly in the steep, dry, and rugged terrain of the Pasayten Wilderness. The fire had grown to almost 50,000 acres as of Monday, July 21, when this image was captured by the satellite. In the close-up image, the “hot spots” have been enhanced in yellow to show the areas where actively burning fires were detected by MODIS. Details of the smoke plume are evident as well.

The MODIS sensors on the Terra and Aqua satellites provide critical big-picture information on the number and general size of fires burning across the U.S. The MODIS Rapid Response System at Goddard Space Flight Center processes the observations in near-real time and automatically sends them each day to the USDA Forest Service. The Forest Service incorporates the fire detections into their daily incident maps and uses the information to help decide where firefighting resources are needed most across the country.

Other NASA Earth Observing System satellites and sensors contribute to national and international fire monitoring. The Multi-angle Imaging Spectroradiometer (MISR) provides observations of smoke that help map the altitude and structure of smoke plumes. Carbon monoxide given off by the fires is tracked by the Measurements of Pollution in the Troposphere sensor (MOPITT) on Terra. Other satellite sensors, such as the Advanced Spaceborne Thermal Emission and Reflection Radiometer (ASTER) on Terra and the Landsat satellite provide a more spatially detailed picture over smaller areas. Visit Natural Hazards: Fires for satellite imagery of recent fires around the world. For information on how to acquire fire-related data from NASA’s Earth Observing System Data Centers, please visit the DAAC Alliance.