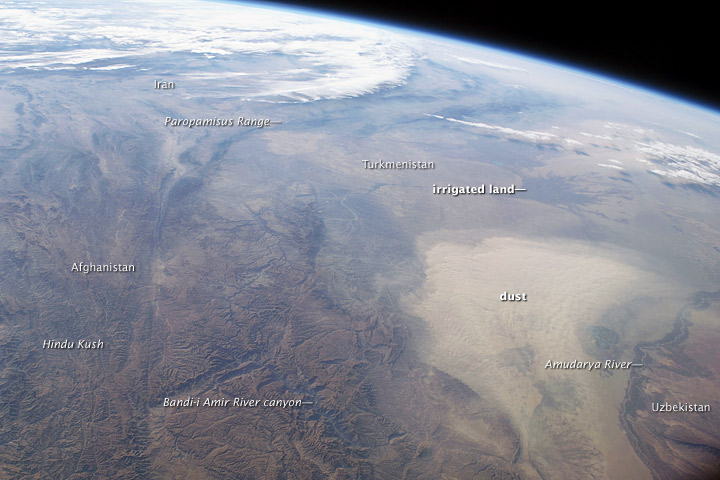 This west-looking astronaut photograph, taken with a short focal length lens from the International Space Station, spans a wide swath of central Asia—from Afghanistan, along the length of Turkmenistan, and beyond to the Caspian Sea. Winds blowing down the largest river valley in the region, the Amudarya, were strong enough to raise a large dust storm. Dust appears as a light brown mass extending into the center of the image from the lower right. Diffuse dust from prior windy weather appears over much of the area making a regional haze that hides landscape details. The haze partly obscures the irrigated agriculture in Turkmenistan and entirely obscures the Caspian Sea.

Numerous rivers rise in the Hindu Kush range (lower left). The Band-i Amir River is a major tributary of the main regional river, the Amudarya, which it reaches via a deep canyon. The Amudarya River was the major historical contributor of water to the Aral Sea, but today extensive diversion of river water for agricultural purposes has led to desiccation of the sea bed. The exposed sea bed is a major source of saline dusts contaminated with agricultural chemicals, and it poses a significant environmental and human health hazard to central Asia. To a lesser extent, dusts are also mobilized from sediments along the Amudarya River channel.

The Paropamisus Range and the Amudarya (also known as the Oxus River) are mentioned in histories of Alexander the Great’s famous military expedition from Greece to India. His horsemen are described as having made a fast side excursion from near the Caspian Sea (image top right) as far as the Amudarya (image lower right).

Astronaut photograph ISS017-E-19616 was acquired on October 16, 2008, with a Nikon D2Xs digital camera fitted with a 28 mm lens, and is provided by the ISS Crew Earth Observations experiment and Image Science & Analysis Laboratory, Johnson Space Center. The image was taken by the Expedition 17 crew. The image in this article has been cropped and enhanced to improve contrast. Lens artifacts have been removed. The International Space Station Program supports the laboratory to help astronauts take pictures of Earth that will be of the greatest value to scientists and the public, and to make those images freely available on the Internet. Additional images taken by astronauts and cosmonauts can be viewed at the NASA/JSC Gateway to Astronaut Photography of Earth.Caption by M. Justin Wilkinson, NASA-JSC.

An astronaut photograph shot with a short focal length lens shows a wide swath of central Asia and the Earth’s limb in the distance.

The Aral Sea has shrunk to less than half its size since 1985. It receives little water (sometimes none) from the two major rivers that empty into it—the Syr Darya and Amu Darya. Instead, the river water is diverted to support irrigation for the region’s extensive cotton fields. Recently, water scarcity has increased due to a prolonged drought in Central Asia. As the Aral Sea recedes, its former seabed is exposed. The Aral’s sea bed is composed of fine sediments—including fertilizers and other agricultural chemicals—that are easily picked up by the region’s strong winds, creating thick dust storms. The International Space Station crew observed and recorded a large dust storm blowing eastward from the Aral Sea in late June 2001. This image illustrates the strong coupling between human activities (water diversions and irrigation), and rapidly changing land, sea and atmospheric processes—the winds blow across the Sea and pick up dust (former sea bottom sediments) as soon as the blowing air masses hit land.