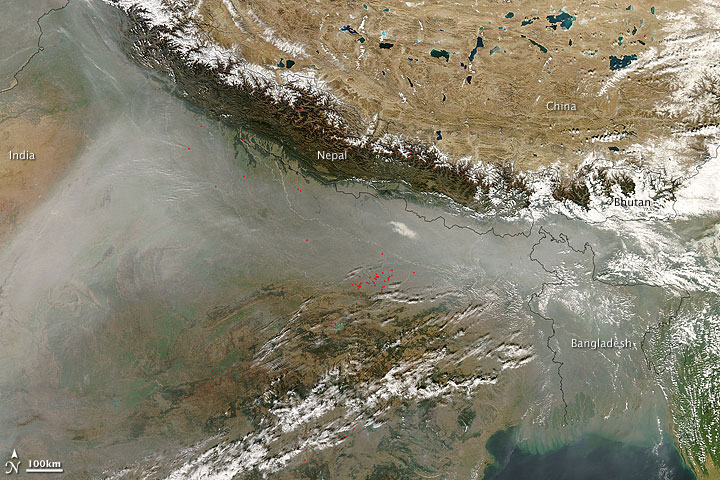 Heavy haze continued to cling to the southern face of the Himalaya in December 2008. The Moderate Resolution Imaging Spectroradiometer (MODIS) on NASA’s Aqua satellite captured this image on December 11, 2008. In this image, the haze appears thickest immediately south of Nepal in the east, and over north-central India in the west. In the west, the haze appears to fork, with thicker haze appearing in the south. A small cluster of fires, marked by red dots, appears along the southern edge of the band of haze. Although they likely contribute, they can account for only a small portion. Most of the haze likely results from urban and industrial pollution.

Almost a month before MODIS acquired this image, the United Nations Environment Programme released a report describing the consequences of atmospheric brown clouds, including darkening city skies, faster-melting Himalayan glaciers, and more extreme weather. According to the report, the clouds primarily affected air quality in Asia, probably worsening the effects of climate change in that region. Globally, however, the clouds could have the opposite effect by reflecting sunlight back into space, thereby masking the effects of climate warming.

Thick haze collected south of the Himalaya in early December 2008, spreading toward the south and east over the Bay of Bengal.

Haze and clouds hovered over northern India and Bangladesh in early January 2009.