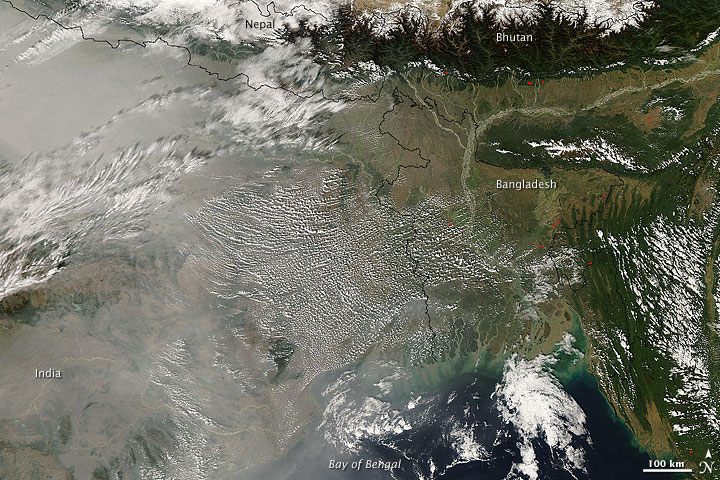 Thick haze collected south of the Himalaya in early December 2008, spreading toward the south and east over the Bay of Bengal. The Moderate Resolution Imaging Spectroradiometer (MODIS) on NASA’s Aqua satellite captured this image on December 8, 2008, showing thick haze in the west and relatively clear skies in the east.

In this image, the haze appears thickest along the left edge of the image. This results partly from the haze’s location near the edge of the satellite swath, where the satellite must peer at an angle through a thicker layer of atmosphere. Heavy haze, however, often collects south of the Himalaya, and this dingy cloud of gray continued a weeks-long pattern.

On November 13, 2008, the United Nations Environment Programme released a report describing faster-melting Himalayan glaciers, more extreme weather systems, and darkening city skies between New Delhi and Beijing, due to atmospheric brown clouds. According to the report, the clouds—resulting from fossil fuel and biomass burning—primarily affected air quality in Asia, and likely worsened the effects of climate change in that region. Globally, however, the clouds might mask the effect of climate warming by reflecting sunlight back into space.

Thick haze collected south of the Himalaya in early December 2008, spreading toward the south and east over the Bay of Bengal.

Haze and clouds hovered over northern India and Bangladesh in early January 2009.