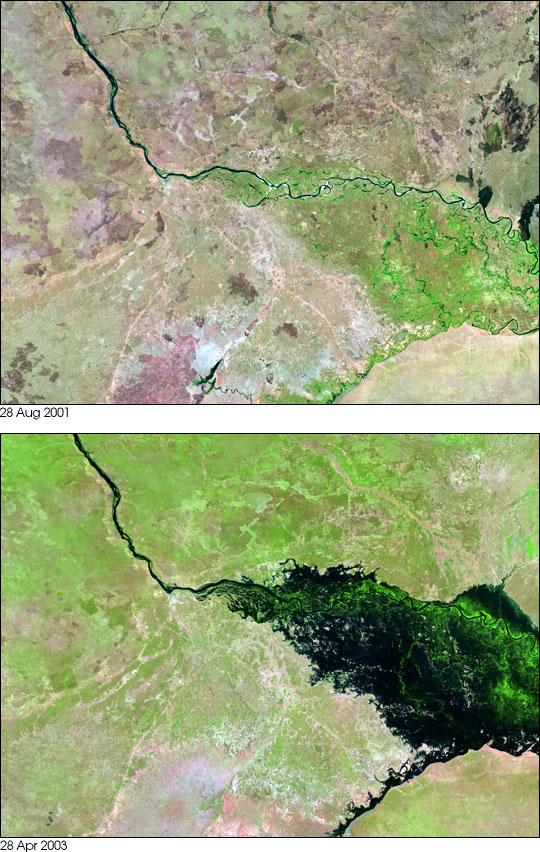 Flooding along Africa’s Zambezi River in April 2003 turned the normally thin blue line of the river (top image) into a vast swamp of standing water (bottom) image. The flooded area is mostly in a region of Namibia called the Caprivi Strip. The Caprivi Strip is a thin strip of territory between Zambia—north of the Zambezi in these images—and Botswana, south of the Linyanti River, which flows into the Zambezi from the bottom center of the images.

These images were acquired by Landsat 7's Enhanced Thematic Mapper plus (ETM+) sensor on August 28, 2001, and April 28, 2003. These are false color image made using infrared, near infrared, and red wavelengths (ETM+ bands 5, 4, and 3). Water is dark blue, vegetation is green, and low vegetation or bare soil is pink, beige, or tan.

The Zambezi River drains the highlands of Angola and Zambia in southern Africa and flows through the border regions of Angola, Zambia, the Caprivi Strip region of Namibia, and Botswana before reaching Victoria Falls on the Zambia and Zimbabwe border. The falls, one of the largest in the world, are fed by the strong flow of the Zambezi River, which ebbs and flows with the seasonal rains. The rainfall percolates through the river system and creates seasonal floods. Even by the usual standards of seasonal change, though, this year’s rains and subsequent flooding were well above normal. Dozens of villages were wiped out by the floods, which are being reported as the most severe in more than 20 years, with tens of thousands of people displaced.

Landsat images from August 2001 and April 2003 show the before and after of massive flooding along the Zambezi River at the border of Zambia and Namibia.