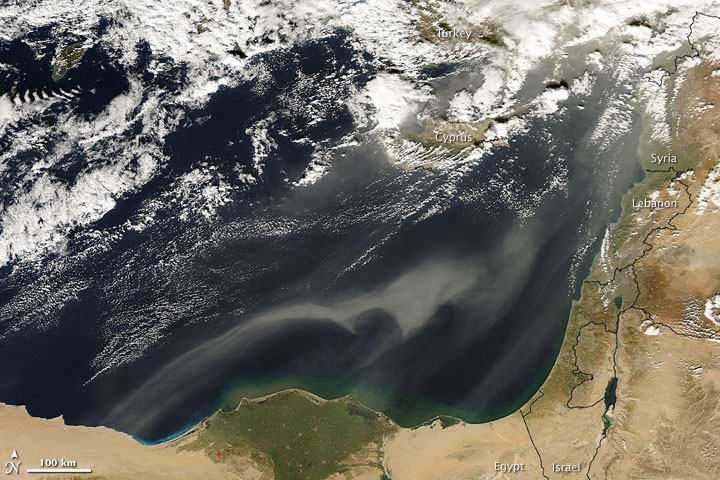 Dust plumes blew off the north coast of Africa and over the eastern Mediterranean Sea in late November 2008. The Moderate Resolution Imaging Spectroradiometer (MODIS) on NASA’s Aqua satellite captured this image of the region on November 23, 2008, around 1:15 p.m. local time (11:15 UTC). In this image, the gray-beige dust plumes contrast with the navy blue ocean but mingle with the clouds over Cyprus, Syria, and Turkey.

Roughly three hours before this image was acquired, MODIS on NASA’s Terra satellite captured more dramatic imagery of the dust storm. Dust appearing thicker in that image results partly from the plumes’ position near the satellite swath edge. At the edge of a swath, a satellite observes the Earth at a larger angle, and the sensor must look through through a longer path through the atmosphere.

The dust plumes likely arose from Saharan dust. Aqua captured the beginnings of the storm blowing off the African coast the previous day.

Dust plumes blew off the north coast of Africa and over the eastern Mediterranean Sea in late November 2008.

Dust over the Central Mediterranean