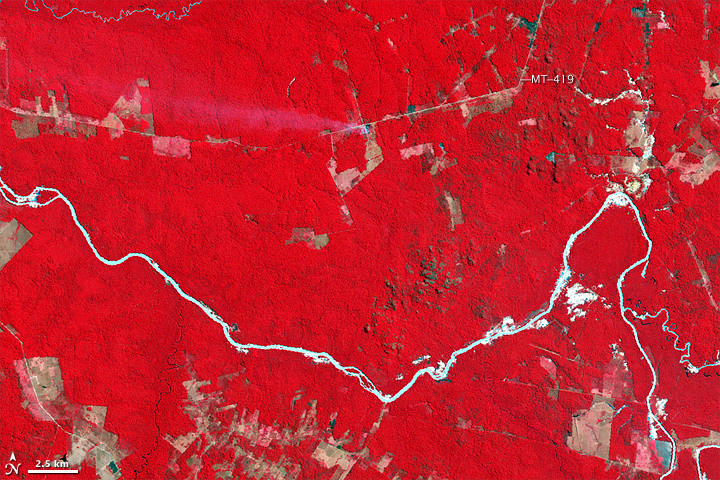 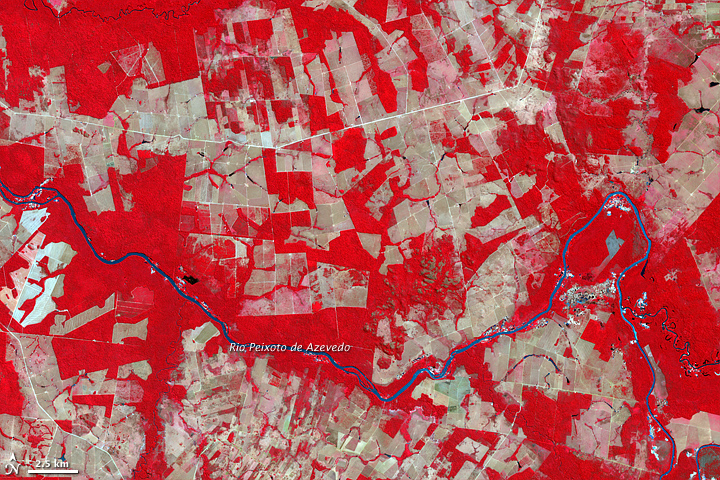 An inland state of central Brazil, deep in the Amazon interior, Mato Grosso was long isolated from the outside world. A railroad, followed by highways and airplanes, eventually connected this state with other regions in the twentieth century. By the early twenty-first century, modern technology had clearly reached Mato Grosso—and produced widespread change.

The Thematic Mapper on NASA’s Landsat 5 satellite captured the top image of part of Mato Grosso on August 6, 1992. The Advanced Spaceborne Thermal Emission and Reflection Radiometer (ASTER) on NASA’s Terra satellite captured the bottom image of the same area on July 28, 2006. In both of these false-color images, red indicates vegetation, and the brighter the red, the denser the vegetation. The Rio Peixoto de Azevedo appears pale blue, nearly white, in 1992, perhaps a combination of reflective sediment or sunlight glinting off the water.

The most conspicuous difference between the images is the widespread forest clearing—visible as rectangles of gray-beige—that had occurred by 2006. The most intense areas of clearing appear along roadways, such as road MT-419, which runs east to west north of the river. A 2006 study found that Brazil’s mechanized agriculture increased by more than 3.6 million hectares (8.9 million acres) between 2001 and 2004, growing more than 540,000 hectares (1.3 million acres) in Mato Grosso alone. Clearing for pasture was still the leading cause of deforestation at that time, but the contribution from large agricultural clearings, such as for soy plantations, was increasing.

The most conspicuous difference between the images is the widespread forest clearing—visible as rectangles of gray-beige—that had occurred by 2006.