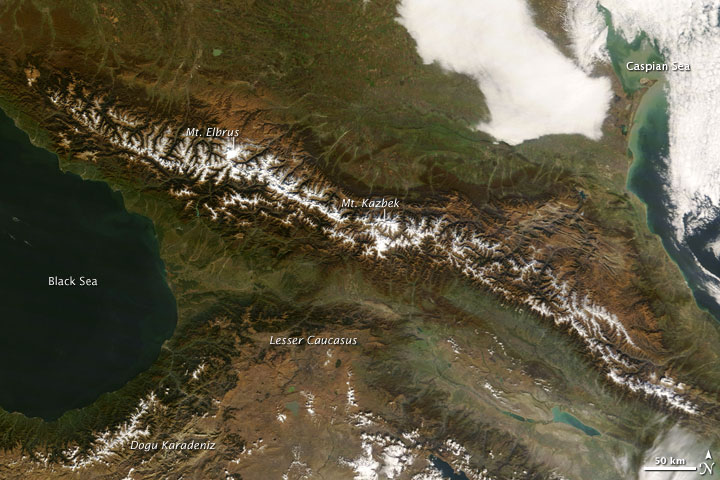 Fall color highlights the rugged topography of the Caucasus Mountain Ranges and surrounding lowlands on November 9, 2008. A spine of snow-covered peaks runs almost the entire length of the Greater Caucasus (image center) between the Black Sea (left) and the Caspian Sea (right). The highest peak in the range is glacier-covered Mt. Elbrus (5,642 meters, or 18,510 feet). In the middle of the range is the dormant, but still dangerous, Mt. Kazbek Volcano.

The varied shades of deep green, rich brown, burnt orange, and tan indicate that the kinds of vegetation on these mountains change from high to low elevations and also from west to east. To the south of the Great Caucasus, the lack of snow on the Lesser Caucasus Range reveals their generally lower elevation. The Lesser Caucasus merge to the southwest with the Dogu Karadeniz Mountains of Turkey.

The Caucasus Mountains form a border between Russia to the north, Georgia to the south, and Azerbaijan to the southeast. The Lesser Caucasus extend southeastward from Georgia into Armenia. This image of the area was captured by the Moderate Resolution Imaging Spectroradiometer (MODIS) on NASA’s Terra satellite.

The Caucasus Mountains form a long (more than 1200 kilometers) and steep spine connecting the Black Sea to the Caspian. Mt. Elbrus, the summit of the Caucasus Mountains, is located in southern Russia just north of the Georgian border, and is distinguished as Europe’s highest peak (5642 m). Elbrus is also an ancient volcano, although it has not erupted for nearly 2000 years. Elbrus’s profile comprises two volcanic peaks (East and West). They are popular trekking and mountain climbing destinations—the saddle between them provides access to the region. In mid-September, the Russian and American crew aboard the International Space Station viewed Mt. Elbrus’s glaciated landscape as part of a study by Russian glaciologists. Elbrus is located west of the recent glacier slide on Mt. Kazbek, another giant peak in the Caucasus Mountains. 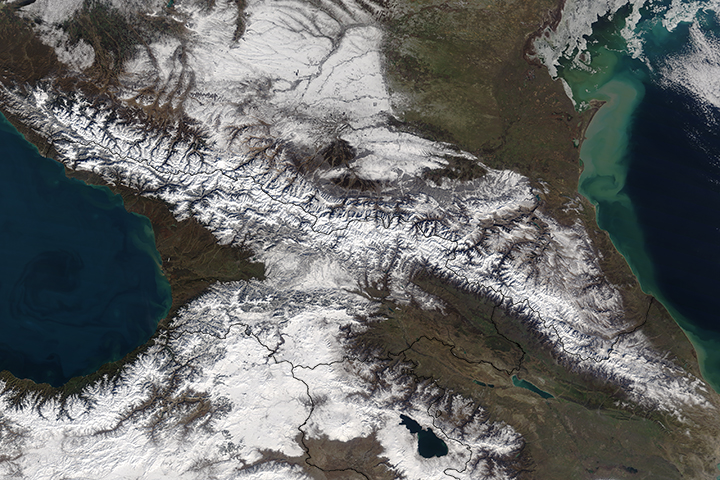 Fires in the Foothills of the Caucasus Mountains