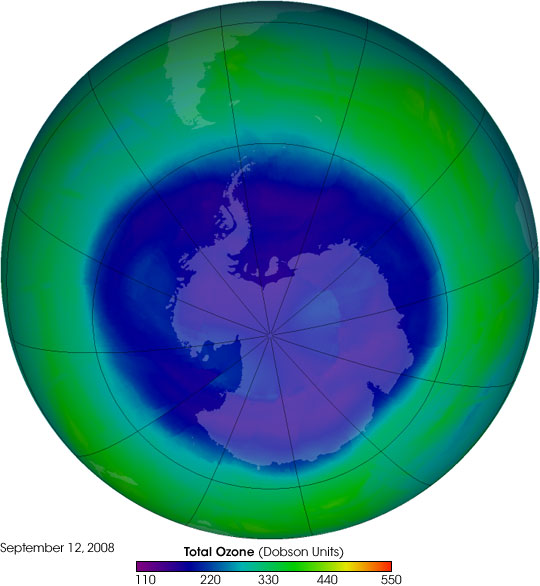 On September 12, 2008, the Antarctic ozone hole reached its maximum size for the year. Represented by blues and purples in this image from the Ozone Monitoring Instrument (OMI) on NASA’s Aura satellite, the ozone hole covered about 27 million square kilometers, making it larger than North America, which is about 25 million square kilometers. Though larger than it was in 2007, the 2008 ozone hole was still smaller than the record set in 2006.

Stratospheric ozone absorbs ultraviolet (UV) light that can be dangerous to living things. A thinner ozone layer increases humans’ and other creatures’ exposure to harmful UV light. In the stratosphere, ozone blocks ultraviolet light that could cause skin cancers, cataracts, and other damage to animals and plants if it reached the surface. (In contrast, ozone that forms near the ground from air pollution is harmful. It can aggravate respiratory problems like asthma, bronchitis, and emphysema, and it can damage crops and other plants.)

The ozone hole does not persist year round. It forms every spring in the Southern Hemisphere (August and September), when sunlight begins to return to Antarctica after the months of polar darkness. During the cold, dark winter, a vortex of winds encircles Antarctica. This vortex isolates the air in the stratosphere from mixing with warmer air at higher latitudes. In the extreme cold, unusual clouds, called polar stratospheric clouds, form, even though the air is very dry. Within these clouds, chemically stable forms of chlorine and bromine (put into the atmosphere by people) are converted into less stable gases.

Although the ozone hole is not the cause of global warming, the two man-made climate changes are related in other ways. The destruction of ozone has caused the Antarctic stratosphere to be cooler than it would otherwise be. Models and observations indicate that the cooling intensifies the vortex of winds that isolate frigid Antarctic air from warmer air from higher latitudes. Ozone-hole-related cooling may be the reason why interior Antarctica has not warmed up as fast as most of the rest of the planet due to global warming. NASA scientists are using data from satellites like Aura along with computer simulations of atmospheric chemistry and global climate to predict how recovery of the ozone hole could accelerate Antarctic warming.

On September 12, 2008, the Antarctic ozone hole reached its maximum size for the year.