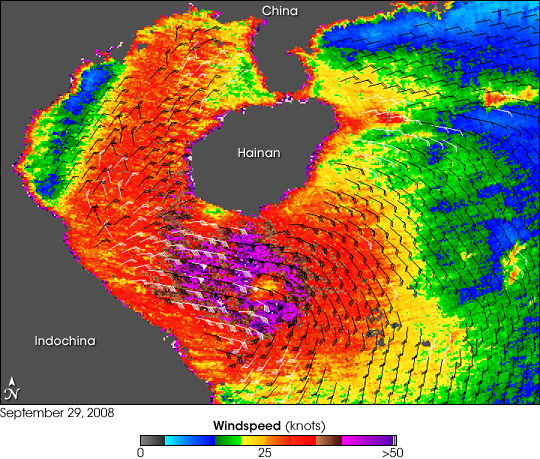 Within days after Typhoon Hagupit drenched northern Vietnam with flood-inducing rains, Tropical Storm Mekkhala moved ashore on September 30, 2008. This image shows Mikkhala as it approached Vietnam on September 29. The image depicts wind speed (in color) and wind direction (with arrows) as observed by the QuikSCAT satellite. A day later, the storm system slammed into the Vietnam coast, bringing heavy rains and knocking down trees and electrical poles throughout the area, said the Associated Press. Authorities had been evacuating people from both coastal areas in the immediate path of the storm and also in the more mountainous inland areas along the storm track, where the risk of landslides and flash floods from heavy rains was highest.

This data visualization of Tropical Storm Mekkhala shows it as a tight ball of circular winds more or less centered on the Gulf of Tonkin between Hainan and the Southeast Asia coast. The image depicts wind speed in color and wind direction with small barbs. White barbs point to areas of heavy rain.

QuikSCAT measurements of the wind strength of Mekkhala and other tropical cyclones (the generic term for typhoons and hurricanes) can be slower than actual wind speeds. QuikSCAT’s scatterometer sends pulses of microwave energy through the atmosphere to the ocean surface and measures the energy that bounces back from the wind-roughened surface. The energy of the microwave pulses changes depending on wind speed and direction.