Flooding along the Gulf Coast 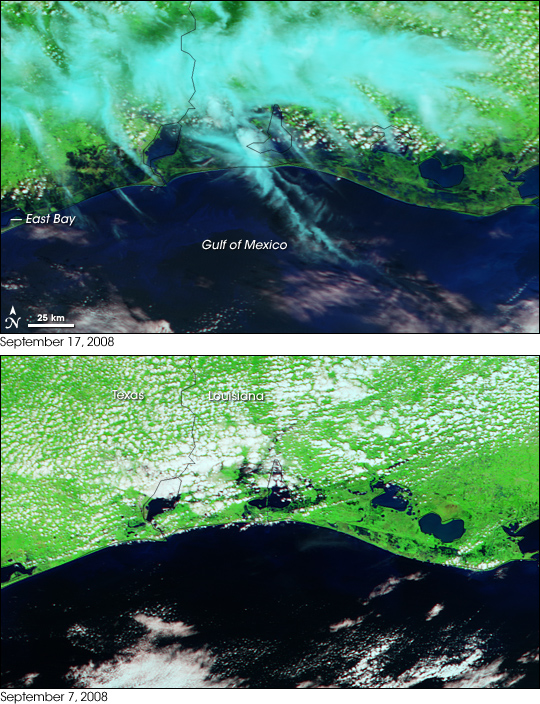 Four days after Hurricane Ike swept ashore over the Gulf Coast of the United States, the clouds cleared enough for the Moderate Resolution Imaging Spectroradiometer (MODIS) on NASA’s Terra satellite to view the storm’s impact. Taken on September 17, 2008, the top image shows a wide swath of coastal flooding not present on September 7, before Ike came ashore. In this type of image, made by combining infrared and visible light, water is black or dark blue, easily visible against the surrounding landscape. In a photo-like image, the flooded region and the surrounding land would blend together in shades of brown. Clouds, light blue and white, still partially obscure the view of the ground.

The images show the extent of coastal flooding that remains after four days. Ike was a monstrous storm, covering much of the Gulf of Mexico in the days before the storm came ashore. (See Hurricane Ike on the Earth Observatory.) The storm pushed a wall of water into the coast as it came ashore. The sheer size of the storm guaranteed that the surge covered a wide swath of Gulf Coast real estate. From east to west, this image stretches from Vermilion Bay, Louisiana, to East Bay (the eastern arm of Galveston Bay near Houston), Texas, a distance of about 275 kilometers (171 miles).

The floods also extend a long distance inland. The strip of black, which is standing floodwater, reaches as much as 25 kilometers (16 miles) inland near the Texas/Louisiana border in this image. Much of the landscape in this region is marshland, which tends to retain floodwater longer than other landscapes.

You can download a 250-meter-resolution KMZ file comparison of the region before and after Hurricane Ike suitable for use with Google Earth.