Cause and Effect of Florida Black Water 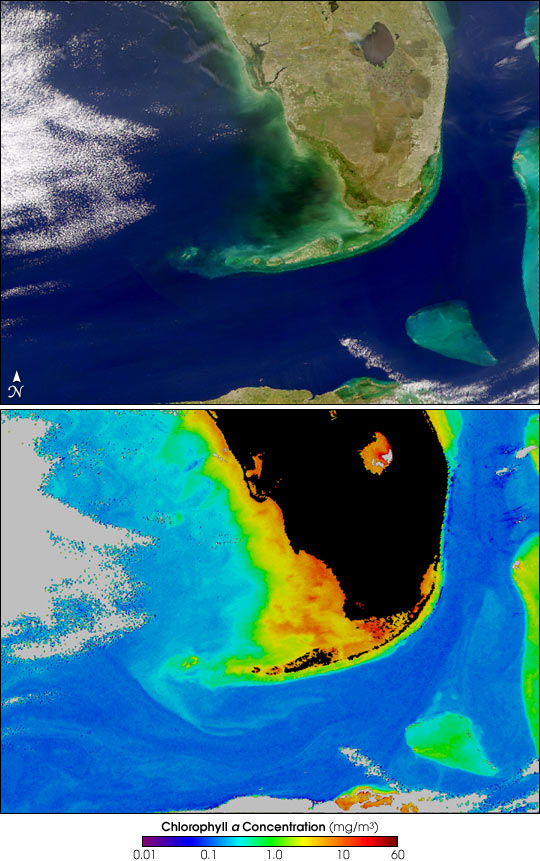 In early 2002, a patch of “black water” spanning over 60 miles in diameter formed off southwestern Florida and contributed to severe coral reef stress and death in the Florida Keys. “The water appeared black in satellite imagery because the concentration of the microscopic plants and other dissolved matters were high,” said Chuanmin Hu of the University of South Florida Institute for Marine Remote Sensing. Because plants and dissolved matter absorb sunlight, they reduce the amount of light normally reflected from the ocean. When a red tide bloom occurs, the water takes on various hues of red or brown. While not all microscopic plants contribute to red tides, the darker hue created by both the plankton and the harmful algal blooms made the water appear black when seen from the satellite.

When Hu and his colleagues examined the data collected by divers from the dark water area in the Florida Keys, they discovered a 70 percent decrease in stony coral cover, a 40 percent reduction of coral species, and a near-elimination of sponge colonies at two reef sites after the dark water passed. By examining satellite images and field survey data, the authors concluded that the coral reef ecosystem was stressed by microscopic organisms and toxins contained in the dark water.

The images above show the Florida Coast during the height of the plume on February 4, 2002. The top image is true color, similar to how the human eye would view the scene from an altitude of 705 km (440 miles). The lower image shows chlorophyll concentration—a measurement of microscopic marine plants called phytoplankton. The bright red area north of the Florida Keys corresponds to the dark water in the true color image, and indicates very high numbers of phytoplankton.