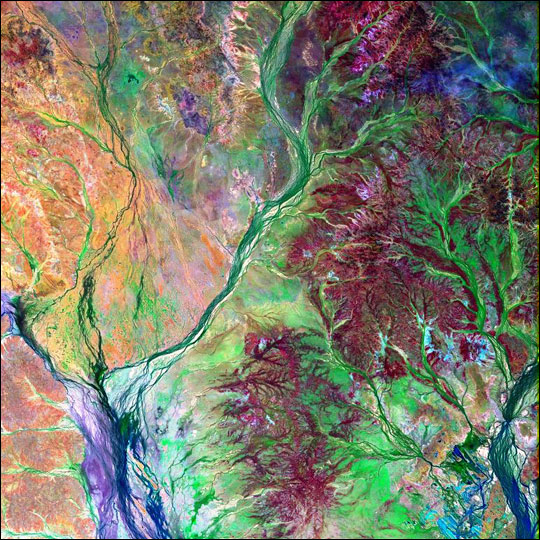 Geologists refer to the 1.3-million-square-kilometer (500,000-square-mile) region in southwestern Queensland, Australia, as “Channel Country.” The name derives from the complex network of riverbeds and streams coursing through the relatively flat terrain, made mostly of clay. The portions of the Burke and Hamilton Rivers shown in this false-color satellite image are typical of the branching outflow patterns (called alluvial fans) commonly found in Channel Country.

The image shows an area where rivers emerge from highlands surrounding the Lake Eyre drainage basin. Weather patterns over these highlands vary through the seasons. Winters are generally very dry, while the air in summertime becomes much more humid, bringing monsoon rains like those found in the tropics. Annual rain accumulation reaches about 50 cm (20 inches) in the Great Dividing Range, situated to the east of this scene. The rains come in intermittent bursts and so the streams shown in this scene are short-lived, flowing only in discreet flood seasons that are separated by long droughts. Between flows, water collects and forms pools only in the deeper channels. Such pools are critical elements in the ecosystem and in the grazing economy. The Channel Country rivers lose water gradually through evaporation and infiltration as they flow toward the Lake Eyre basin.

This image was acquired by Landsat 7’s Enhanced Thematic Mapper plus (ETM+) sensor on January 10, 2000. This is a false-color composite image made using shortwave-infrared, near-infrared, and blue wavelengths (ETM+ bands 7, 4, & 1).