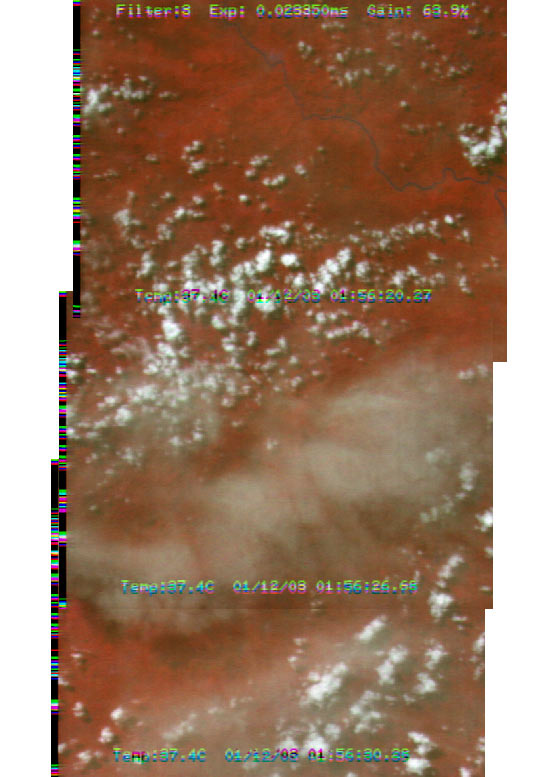 Between two banks of clouds, a pall of gray smoke hangs above the Amazon rainforest in this image that illustrates how complex interactions between smoke and the atmosphere can influence weather and climate. Few clouds are present in the smoke between the cloud banks. Dark soot particles in the smoke absorb sunlight, which heats up the surrounding air. Water vapor is more likely to condense into liquid water droplets—clouds—in cooler air, so clouds are less likely to form in areas with smoke-warmed air. As a result, fires in the Amazon reduce cloud cover.

The Mediterranean Israeli Dust Experiment (MEIDEX), an instrument that flew aboard Space Shuttle Columbia’s final flight from January 16 to February 1, 2003, acquired this image and measured smoke and other types of aerosols from the Shuttle’s payload bay. MEIDEX also observed a dust storm that originated in the Sahara Desert and carried dust over the Mediterranean Sea. This is a false-color image in which clouds appear white, smoke appears gray, and the Amazon Rainforest appears red.

Several instruments aboard Space Shuttle Columbia, including MEIDEX, were designed to study the Earth from above. Instruments aboard manned spacecraft like the Space Shuttle and International Space Station form an important complement to orbiting satellites and ground-based measurements. Once a satellite is launched into orbit, scientists are limited in their ability to measure exactly how the instrument is changing or degrading over time. Instruments flying aboard the shuttle can be calibrated before and after launch, so their measurements can be more accurate than those from satellites. Using the shuttle instruments to collect observations similar to those made by long-term satellite missions permits scientists to monitor an aging satellite’s accuracy over time. Shuttle-carried instruments are relatively inexpensive because they utilize the Shuttle’s power, data, and communications equipment. Astronauts are also able to aim the sensors aboard, enabling them to capture unique and unpredictable events.