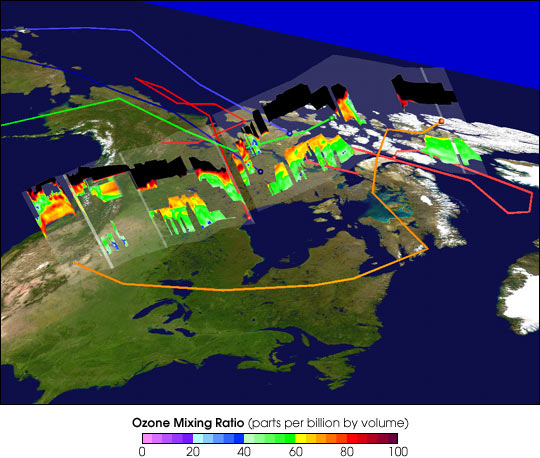 Atmospheric scientists made seven flights to high latitudes from Broomfield, Colorado, with bases in Churchill, Canada, and Thule, Greenland, during the Tropospheric Ozone Production about the Spring Equinox (TOPSE) field experiment. Remote lidar (laser radar) measurements taken by the NASA Langley Research Center’s Lidar Applications Group found high springtime ozone levels in the lower atmosphere along the aircraft’s flight path. The image, recently created to better visualize ozone data from TOPSE, is a representation of all ozone data during April 2000. Blue areas show regions of the atmosphere with little ozone. Yellow to red areas indicate high ozone levels, and black areas represent the stratosphere, where ozone is very high. The colored lines are calculated paths the air mass took going back 10 days in time. Blue and green trajectories show air masses coming from polluted regions of Asia and are associated with high ozone levels in the lower atmosphere.

Background levels of ozone exist in the lower atmosphere (troposphere) at all times, but a peak occurs during the springtime at high northern latitudes. The timing of the peak is unusual because other areas in the Northern Hemisphere, such as over most of the United States, experience their highest seasonal ozone levels during the summer.

Springtime ozone levels in the high northern latitudes in the lower atmosphere have been increasing with time, and TOPSE scientists wanted to know the reason for the ozone peak. They determined that higher springtime ozone amounts could not be explained only by an increase in the natural transport process called stratosphere-troposphere exchange. This process mixes ozone-rich air from the upper atmosphere or stratosphere into the lower atmosphere.

Instead scientists concluded that long-range transport moved air pollution into remote Arctic areas during the winter and into the spring, causing the production of the highest seasonal ozone levels over Canada and the Arctic. Photochemical processes convert some of the air pollution into ozone in the troposphere during the spring when more sunlight reaches the Arctic. These processes begin when sunlight comes into contact with chemically active molecules in the lower atmosphere like those found in air pollution.

This research stems from an investigation that was one of many studies conducted from February to May 2000 during TOPSE, a field experiment funded by the National Science Foundation and led by the National Center for Atmospheric Research (NCAR). The Lidar Applications Group will participate in their next field campaign from January to February 2003 in the SAGE III Ozone Loss and Validation Experiment (SOLVE) II.