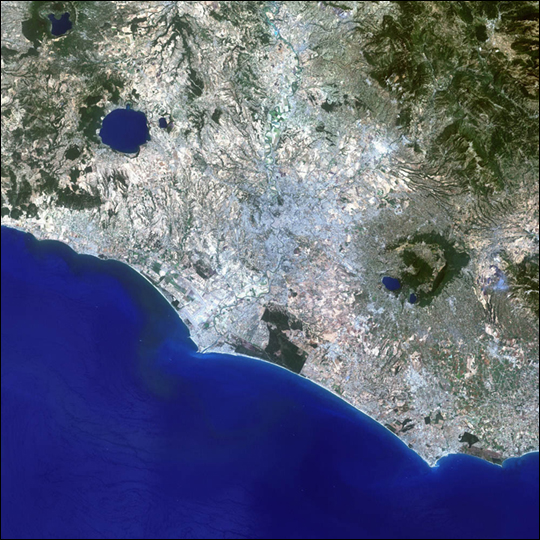 Founded on seven hills along the banks of the Italy’s Tiber River, Rome has had a greater impact on the world than almost any other modern day city. Currently the capital of Italy, Rome holds about 2.7 million people and rests 12 miles inland from the Mediterranean Sea halfway down Italy’s west coast. In the above image, the city appears as a grayish mass. The Tiber River wends its way down the center of the image and through the heart of Rome before flowing into the Mediterranean. The Coliseum, the Pantheon, and the rest of ancient Rome are located in the pinkish area at the center of the city on the big bend in the Tiber River.

According to myth, Rome was founded by Romulus and Remus, who were sons of the Greco-Roman god Mars and the vestal virgin Rhea Silvia. The sons were abandoned at an early age and raised by a she-wolf on the shores of the Tiber, before founding the city in 750 BC. While the myth has the date right, archeological records show that Rome was originally a village occupied by farmers and traders. Since then, the city has twice been the center of the western world. From 100 AD until about 400 AD, Rome was the seat of the Roman Empire, which ruled the entire Mediterranean Basin and lower Europe from the Straight of Gibraltar to the Black Sea. The city then slipped into decay for many centuries before the Catholic Church rose to power and made Rome the center of religious and political life in the Middle Ages. Although Rome now gets by largely on tourism, it has had a tremendous impact on the western world. From the arch to the modern day republic to the Spanish and French languages, Rome’s legacy can be seen and heard in nearly every aspect of modern life.

Rome holds about 2.7 million people and rests 12 miles inland from the Mediterranean Sea halfway down Italy’s west coast. In the above image, the city appears as a grayish mass.