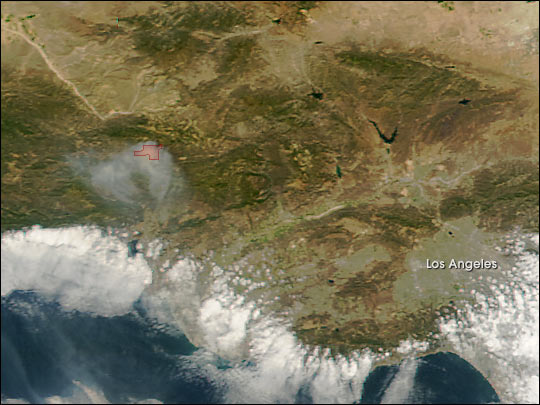 The Wolf Fire, west of Los Angeles and about 10 miles northwest of the town of Ojai, California, started on June 1, 2002. By Wednesday morning, June 5, the fire, which is burning in steep, rugged terrain, covered in chaparral, pinion pine, and grass, had spread to over 8,000 acres. The cause of the fire is still under investigation. This image of the fire (red outline) and the heavy smoke being produced were captured by the Moderate Resolution Imaging Spectroradiometer (MODIS) on the Terra satellite on June 3, 2002.

Multiple structures have been lost on a private ranch in the Los Padres National Forest. Numerous campsites and entrances to the Los Padres National Forest and the Sespe Wilderness Area have been closed to the public. The fire was expected to spread northeastward over the course of the day. At upper left is the southernmost corner of the San Joaquin Valley, and at upper right is the western edge of the Mojave Desert. In the high-resolution imagery, the regular patterns of green, irrigated farmland in the San Joaquin Valley seem almost unreal compared to the barren Mojave.