Snow and Ice Storm in the Midwest 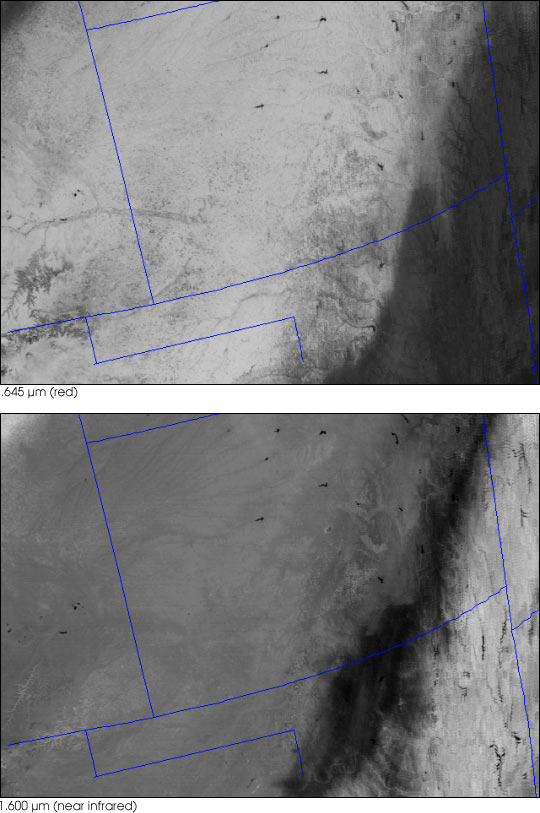 An unusually wide swath of significant snow cover resulted from a series of winter storms moving northeastward across the central United States during January 29–31, 2002. Total snowfall accumulations across the Great Plains, Midwest, and Great Lakes regions were as high as 6-18 inches. Along the southeastern edge of the heavy snow band, significant freezing rain resulted in a 1-3 inch coating of ice across parts of Oklahoma, Kansas, and Missouri. This was one of the worst ice storms in Oklahoma history, downing 4,000 electric power poles and causing loss of power to a quarter of a million homes and businesses.

The Moderate Resolution Imaging Spectroradiometer (MODIS) aboard the Terra satellite produced an image of the area on February 1, 2002. In visible wavelengths (above, top) the ice appears transluscent, in contrast to the bright white snow and darker ground. The ice is visible as a thick black stripe along the lower right edge of the medium gray snow in the near infrared image (above, lower). Because water absorbs near-infrared light so strongly, bare ground is actually brighter than the snow in this image.

A clear, dry wind from the north blew southward across the Great Lakes yesterday, picking up moisture from the lakes and pushing it high into the air. The resulting cloud formation can be seen in this image of United States taken on February 4, 2002, by the Sea-viewing Wide Field-of-view Sensor (SeaWiFs) aboard the OrbView-2 satellite. The cloud formation stretches across Indiana, Ohio, and northeastern Pennsylvania before stopping abruptly at central and southern Appalachian Mountains.

A band of snowfall can also be seen lying across southern Nebraska, Oklahoma, Iowa, and Michegan. The crisp, straight boundaries of the snow are easily discernable in the image. In general, clouds appear streaky and uneven on a satellite image, and snow cover appears solid with definable borders. 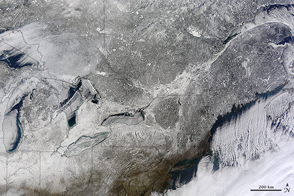 Snow in the Northeastern U.S.

Winter storms brought snow and ice to a large portion of the U.S. Midwest and Northeast.

Snow over the Northeastern United States