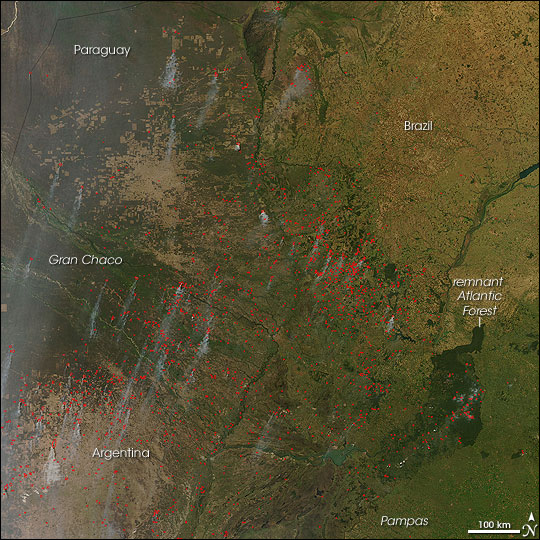 Hundreds of fires (locations marked in red) were burning in central South America on August 26, 2008, when the Moderate Resolution Imaging Spectroradiometer (MODIS) on NASA’s Aqua satellite passed overhead and captured this image. Most of the burning was concentrated in Paraguay (image center), but fires extended northward into Bolivia and southward into Argentina as well. Large-scale burning like this is almost always of human origin. Fire is a land-clearing and agricultural tool across South America, and the fires are probably a mixture of deliberate and accidental ones.

The shades of green in the image reveal some of the major landscapes in the central part of the continent. The dull, greenish-brown areas of northern Argentina and Paraguay are part of a woody savanna landscape called the Gran Chaco. Deforestation in the area is easily visible because of the extreme contrast between the dense thickets of the Chaco and the cleared land. In the peninsula-like tip of Argentina, isolated patches of deep green are remnants of the Atlantic Forest. The Atlantic Forest is distinct from the Amazon, and it dominated the eastern seaboard of southern Brazil before European settlement. In the southern part of the image, a lighter, speckled green shows the grasslands (widely cultivated for ranching and farming) known as the Pampas.

Although deforestation in the Amazon is a more well-known environmental problem in South America, each of these unique landscapes is undergoing rapid change.