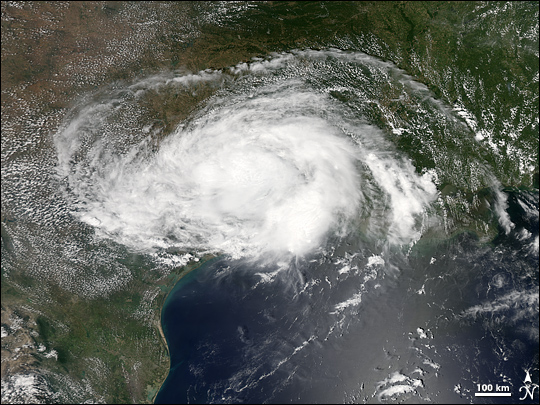 By August 6, 2008, Tropical Storm Edouard had come ashore in Texas. The Moderate Resolution Imaging Spectroradiometer (MODIS) on NASA’s Aqua satellite captured this image of the storm at 2:17 p.m. local time (19:17 UTC) on August 5 as the satellite passed over the Gulf of Mexico and southwestern United States. In this image, the storm has a flattened spiral, with clouds reaching from New Orleans to central Texas. It possessed the spiral shape of a strong storm system, but lacked the well-organized and powerful winds of more severe hurricanes.

As expected, Edouard never became a hurricane and was downgraded from a tropical storm to tropical depression near the time MODIS acquired this image. According to a report from the U.S. National Hurricane Center, elevated oil rigs south of the Louisiana coast reported sustained winds of 72 to 89 kilometers (45 to 55 miles) per hour, well below the wind-speed threshold for a Category 1 hurricane. Without ever reaching hurricane status, the storm made landfall west of the Texas-Louisiana border, east of Galveston, Texas. Besides strong winds, heavy rains, and a brief electrical outage, Edouard caused little damage.

By the afternoon of August 4, 2008, Tropical Storm Edouard was headed for the U.S. Gulf Coast.

Tropical Storm Joaquin, east of the Bahamas, strengthened into a Category 1 hurricane.

The MODIS instrument on NASA's Terra satellite captured this natural-color image of Tropical Storm Hermine as it crossed from the Gulf of Mexico into Texas on September 7.