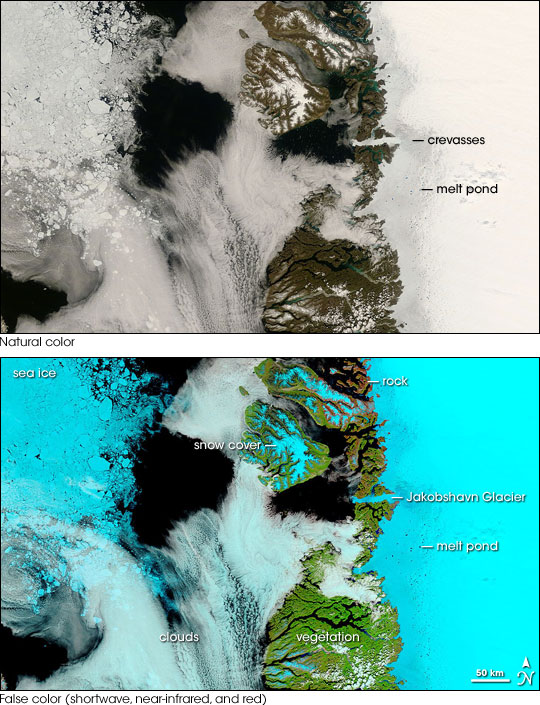 In late June 2008, melt season had begun along the west coast of Greenland. The Moderate Resolution Imaging Spectroradiometer (MODIS) on NASA’s Terra satellite captured these images on June 26, 2008.

The top image is a natural-color image, similar to what a digital camera would record. In this image, snow, ice, and clouds all appear white. Upstream from Jakobshavn Glacier, crevasses, or cracks, have colored the ice pale gray. Ponds of melt water dot the edge of the Greenland Ice Sheet.

The bottom image is a false-color image that uses a combination of light visible to human eyes and light our eyes cannot see. This image highlights several features of the west coast of Greenland that can be difficult to discern in a true-color image. In this image, snow and ice appear bright turquoise, clouds appear translucent pale blue, water appears navy blue or black, vegetation appears bright green, and bare rock appears pinkish-brown. Immediately west of the ice, vegetation covers much of the Greenland coast, although the vegetation is not necessarily as robust as this bright green implies. North of Jakobshavn Glacier, the land tends more toward bare ground. More conspicuous in this image than in the natural-color shot, melt ponds make numerous black marks on the ice surface.

Reaching all the way to the sea is Jakobshavn Glacier. At the time MODIS acquired this image, Jakobshavn was moving at a rate of roughly 14 kilometers per year, making it the world’s fastest glacier.