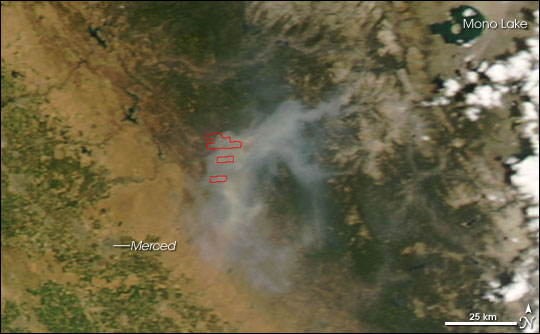 In the Sierra Nevada Mountains between Merced and Mono Lake, a large forest fire raged near Yosemite National Park in late July 2008. This image of the region was captured by the Moderate Resolution Imaging Spectroradiometer (MODIS) on NASA’s Aqua satellite on July 28, 2008. Places where the sensor detected actively burning fire are outlined in red. Smoke fills canyons and hides the surface. Forests are dull, dark green, while cropland in the San Joaquin Valley around Merced is brighter green. Alpine areas (bare ground) around Mono Lake are tan.

According to the July 29 report from the National Interagency Fire Center, the Telegraph Fire was estimated to be 29,600 acres, having grown 3,470 acres in the previous 24 hours. It was only 10 percent contained. Evacuations and road closures were in effect in the area.

The high-resolution image provided above is at MODIS’ maximum spatial resolution (level of detail) of 250 meters per pixel. It also shows the Basin Complex Fire to the southwest, near Big Sur. The MODIS Rapid Response Team provides twice-daily images of the region in additional resolutions and formats, including an infrared-enhanced version that highlights burned ground.