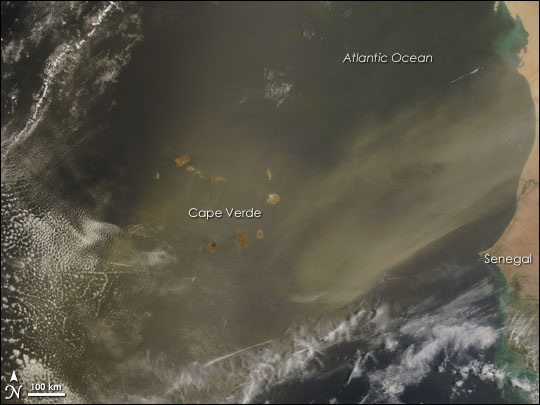 Dust plumes from the Sahara Desert blew off the west coast of Africa and over the Atlantic Ocean in mid-June 2008. The Moderate Resolution Imaging Spectroradiometer (MODIS) on NASA’s Terra satellite took this picture on June 15, 2008. This natural-color image shows dust plumes blowing toward the southwest, over Cape Verde. West of the archipelago, the dust remains discernible, mingling with dots of white clouds. Over the island chain, the dust is thin enough to allow a view of the land and ocean surface, but thick enough to produce an amorphous tan haze.

Acquired July 2, 2009, this natural-color image shows a massive arc of Saharan dust over the Atlantic Ocean, stretching well over 1,000 kilometers west of the African coast.

Large, translucent dust plumes blow westward off the African coast and over the Atlantic ocean in this true-color image from June 4, 2009.