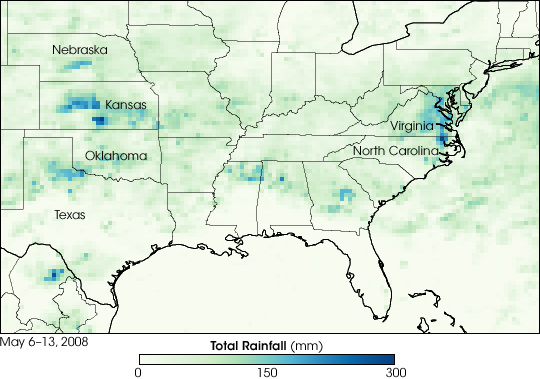 A major spring storm system swept across the United States, leaving a swath of devastation from the Great Plains to the East Coast. Powerful tornadoes caused numerous deaths in the Plains and the central Mississippi Valley. The same weather patterns also brought flooding rains to the Plains and mid-Atlantic states over a one week period in early May.

This color-coded visualization shows rainfall estimates produced by the Multi-satellite Precipitation Analysis (MPA) at NASA’s Goddard Space Flight Center, a near-real-time assessment of rainfall based in part on observations from the Tropical Rainfall Measuring Mission (TRMM) satellite. Several states received heavy rain between May 6 and 13, 2008. The highest rainfall totals, reaching as much as 200 millimeters (8 inches), were recorded in southeastern Virginia not far from the border with North Carolina, with lesser, though still heavy, rainfall (100 mm, or 4 in) through eastern Virginia and central Maryland. Significant rain was also recorded in the plain states of Nebraska, Kansas, Oklahoma, Missouri, and parts of northern Texas.

The heavy rains were caused by a kink in the jet stream, known as an upper-level trough, which moved over the central part of the United States on May 10. This trough drew in warm moist air off the Gulf of Mexico into northern Texas and Oklahoma. This pattern of strong wind at high altitudes (from the jet stream) and moist air near the surface is ideal for the development of powerful thunderstorms and the rolling air patterns that develop into tornadoes. The trough and its associated low pressure system of moisture-laden air from the Gulf did not reach the East Coast, but induced a second pattern of low pressure to develop there, which drew moisture in off the Atlantic. The heavy rains in Virginia came on the heels of tornadoes just the week before in the same area, and caused flood damage and road closures throughout the area.

A major spring storm system swept across the United States in mid-May 2008, causing tornadoes and flooding from the Great Plains to the East Coast.

Deadly Rains in the U.S. Midwest

An early spring storm system advanced out of the Southern Plains in mid-March 2008, causing widespread flooding. Strong southerly winds developed ahead of an area of low pressure located over the Southern High Plains and drew moisture up from the Gulf of Mexico across Texas and Louisiana. This warm, moist air collided with a frontal boundary, producing repeated bouts of thunderstorms and heavy rain from central Texas through Oklahoma and into Kansas and Missouri.

Tornadoes in the Southern United States