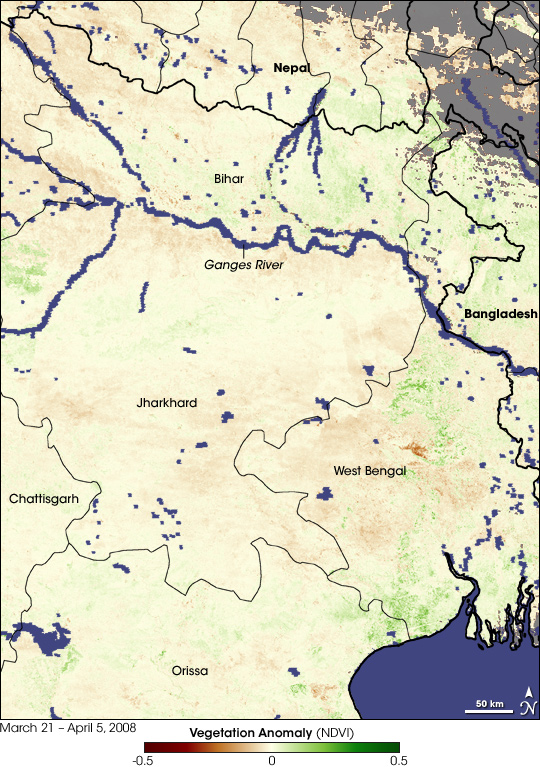 At the end of March, India’s spring crops were ripening in advance of harvest in April. With the harvest in the spring of 2008, the country’s rice and corn production were set to reach record levels, said the U.S. Department of Agriculture’s Foreign Agricultural Service. This image shows vegetation conditions as observed by the Moderate Resolution Imaging Spectroradiometer (MODIS) on NASA’s Terra satellite between March 21 and April 5, 2008, compared to average conditions observed during the same period from 2000 through 2007. Spots of green faintly color the Indian states of West Bengal and Bihar, two of the areas where rice and corn crops were thriving.

West Bengal was wrapping up its second crop of rice (the rabi, or spring-harvested rice) when the data used to make this image were acquired. A strip of green runs from the Bay of Bengal in the south to the gray, cloud-covered area in the north, indicating that plants were lusher than average. The light brown areas elsewhere in the state point to regions where plants were not growing as much as they normally do at the end of March. The bumper crop of rice followed in the wake of above-average monsoon rains during the June-September monsoon. At the end of the winter harvest, India had produced 81.5 million tons of rice, a million tons more than the 2006-2007 harvest, and by the end of April, production was expected to reach 94 million tons, said the Foreign Agricultural Service.

To the west, Bihar was preparing for a record crop of corn. Rivers running from the Himalaya Mountains into the Ganges bring water and fertile soil to the agricultural state. In Bihar and other corn-growing areas throughout India, good weather conditions sustained a healthy crop that the USDA predicted would yield a record 16.8 million tons of corn. The section of Bihar that is north of the Ganges River is flushed green in this image, a reflection of the good growing conditions.