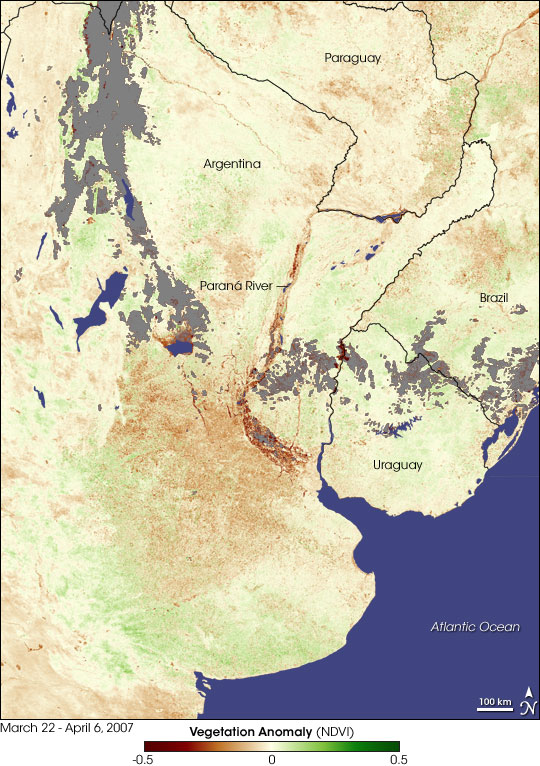 Despite damaging floods, Argentine farmers were expecting a record harvest in April 2007, reported the United States Department of Agriculture’s Foreign Agricultural Service (FAS). Farmers anticipated a record 45.5 million tons of soybeans and a record 22 million tons of corn when the harvest began at the beginning of the month, said FAS. At the end of March, more than 500 millimeters of rain (about half the average annual rainfall) fell in the period of a few days over parts of the Santa Fe and Entre Ríos provinces, the land spanning the Paraná River. The rain fell on ground already soggy from excess rain, triggering extensive flooding. The floods destroyed between 0.5 and 2 million tons of soy, but caused little damage to the already mature corn crop, said FAS.

Both the thriving crops and the flood damage to vegetation are shown in this image. The image shows a vegetation index, a record of plant growth, compiled between March 22 and April 6, 2007, immediately following the damaging rains and floods. The image compares the 2007 vegetation growth to average conditions observed by the Moderate Resolution Imaging Spectroradiometer (MODIS) on NASA’s Terra satellite during that same interval between 2000 and 2005. Areas where plants are growing faster or thicker than normal are green, while areas where plant growth has slowed or where plants are less dense than average are brown.

The Paraná River is outlined in brown where the overflowing river destroyed vegetation. The land south and west of the river is also dominated by brown, indicating that plants were less healthy than average, probably because of excess rain. This pattern of damage matches the flooding shown in daily snapshot images of Argentina. Other crop areas in the country are green, showing that growing conditions were good. Even within the flood area, tiny flecks of green show that some fields are still flourishing. Areas where MODIS didn’t collect data—probably because of persistent cloud cover—are gray.