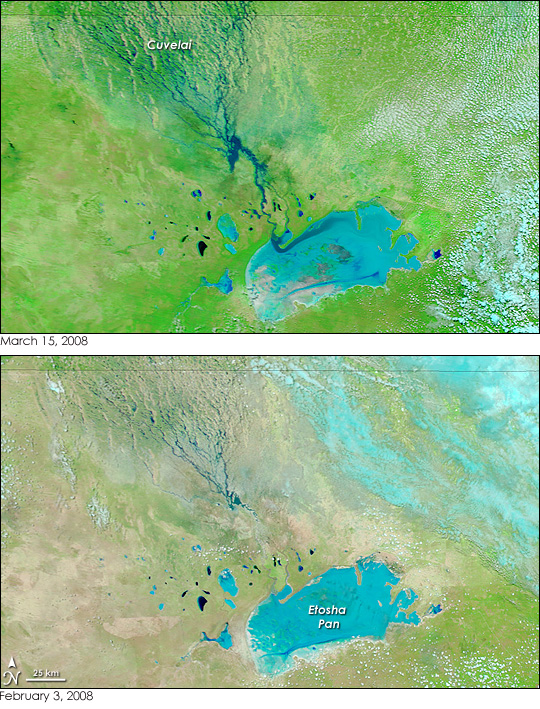 Northern Namibia is usually dry, and in recent years, drought made it drier. The low flat plain that stretches to the Angolan border is lined with dry river channels that lead to a vast salt pan, the Etosha Pan. The river channels, known together as the Cuvelai, brimmed with water in early 2008 as heavy rains triggered floods throughout southern Africa. In Namibia, the floods started in early February, and by February 3, when the Moderate Resolution Imaging Spectroradiometer (MODIS) on NASA’s Terra satellite captured the lower image, water had already started to flow through the Cuvelai. The Etosha Pan is turquoise, the color of muddy soil or sediment-choked water in this type of image.

By the time Terra MODIS captured the top image on March 15, the floods had expanded. Water flows through the Cuvelai from Angola into the Etosha Pan. Instead of the light blue indicative of either wet soil or a thin layer of water over the bright ground, a channel of dark blue water flows through the northern part of the Etosha Pan. The darker color points to deeper water pooling in the pan. The southwestern corner of the pan, by contrast, is drier than it had been in February.

The rain brought a burst of green to northern Namibia as plants responded to the new abundance of water. The landscape went from tan-pink, the color of bare or sparsely vegetation ground, to bright green. For all that, the rain hurt Namibian agriculture more than it helped, said the United Nations Office for the Coordination of Humanitarian Affairs. The 2007/08 crop was planted late because of a lack of rain only to get waterlogged in the later persistent heavy rains. The stunted crop was further decimated by a rain-induced outbreak of army worms, a fast-breeding pest that consumes all plants in its path, said the United Nations.

An intense rainy season triggered floods across southern Africa in early 2008. In northern Namibia, the floods started in early February and persisted through March.