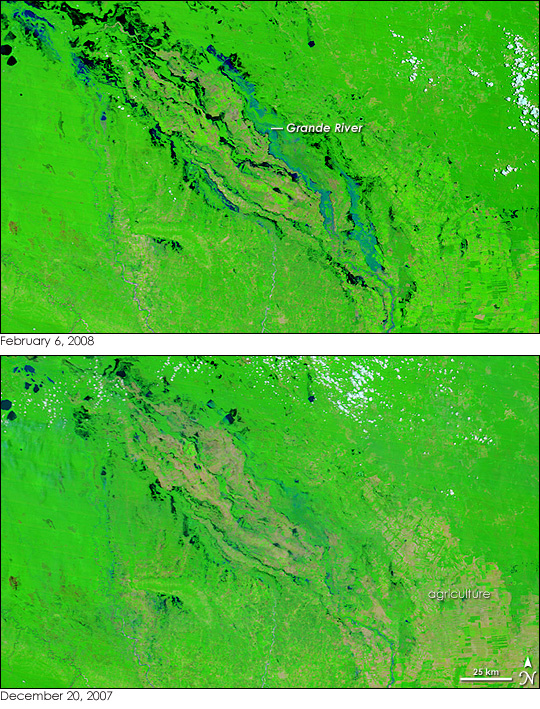 The Pacific Ocean may be on the other side of the Andes Mountains from the Mamoré River basin in Bolivia, but the ocean’s temperature had a lot to do with the flooded state of the river in February 2008. Unusually cool temperatures in the eastern equatorial Pacific, called La Niña, altered weather patterns around the world. In Bolivia, La Niña brought unusually heavy rains, which caused widespread flooding throughout the country. The top image, captured on February 6, 2008, shows floods on the Grande River in the department of Santa Cruz. The lower image is from December 20, 2007, a short time after the rains started. The images were both captured by the Moderate Resolution Imaging Spectroradiometer (MODIS) on NASA’s Terra satellite and show both infrared and visible light. Clear, deep water is black in the images, while mud-choked water or very wet ground is light blue. The plant-covered landscape is bright green, and bare or lightly vegetated areas are tan.

The Grande River flows northwest across the image, splitting into many channels as it crosses low wetlands. Spots of black mixed with a wide ribbon of blue in the top image indicate that the river is flooded, particularly on the northernmost reaches shown. Even grids in the vegetation in the lower right corner of the image show that this is an agricultural region. Dark smears over the fields on February 6 reveal flooding and possible crop loss. The United Nations Office for the Coordination of Humanitarian Affairs (OCHA) reported that 10,310 families were affected by flooding in the department of Santa Cruz. The Grande River was not the only river that was flooded in February. The Grande joins with the Mamoré River, which in turns drains into the Madeira and then the Amazon River in Brazil. Additional flooding along the Mamoré River and its tributaries caused extensive damage throughout much of Bolivia, said OCHA.

Daily images of Bolivia are available from the MODIS Rapid Response System.