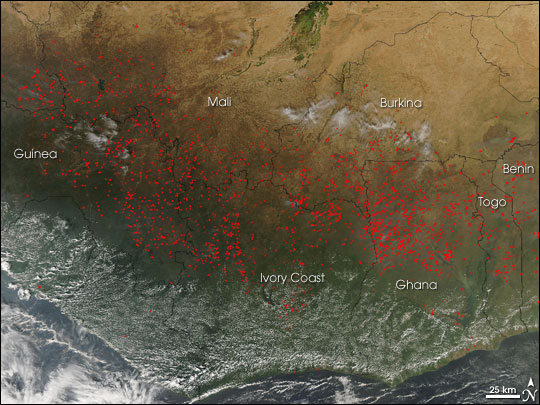 Between the Sahara Desert and the savannas and woodlands closer to the Atlantic seaboard, the interior of West Africa is spanned by a semi-arid grassland called the Sahel. This image of the area was captured by the Moderate Resolution Imaging Spectroradiometer (MODIS) on NASA’s Aqua satellite on December 13, 2007. The agricultural burning season was underway, and MODIS detected hundreds of fires (marked in red). Although such fires are not necessarily hazardous, this kind of large-scale burning can have a strong impact on weather, climate, human health, and natural resources.

The large image provided above has a spatial resolution (level of detail) of 1 kilometer per pixel. The MODIS Rapid Response Team provides twice-daily subset images of the region in additional resolutions.