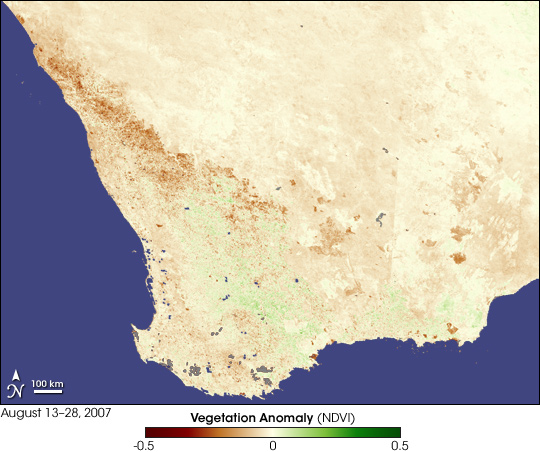 Long-term drought persisted throughout Australia when the normally rainy winter month of August yielded little rain. Most of southern and central Australia received below-average rainfall during the winter, and parts of South Australia and New South Wales recorded their lowest rainfall totals since record-keeping began, said the Australian Bureau of Agriculture and Resource Economics (ABARE) in their September 2007 Crop Report (pdf). This vegetation anomaly image shows the impact of the dry winter on southwestern Australia’s grain belt.

Though Western Australia received more rain than other parts of the country, conditions were still dry. Regions where plants were growing more slowly or producing fewer leaves than average (as measured between 2000 and 2006) are brown, while better-than-average conditions are green. A sprinkling of green is scattered across crop areas in the south, where ABARE reported that rain fell, while a strip of dark brown points to poor conditions in the northwest. This location, too, corresponds with ABARE reports of scant rainfall in the north.

The image was made with data collected by the Moderate Resolution Imaging Spectroradiometer (MODIS) on NASA’s Terra satellite between August 13 and August 28, 2007. Rainfall in early September stabilized the winter crops, leading to a predicted yield of 8.7 million tons in the 2007-2008 growing season, an increase from crops produced in 2006-2007, said ABARE.