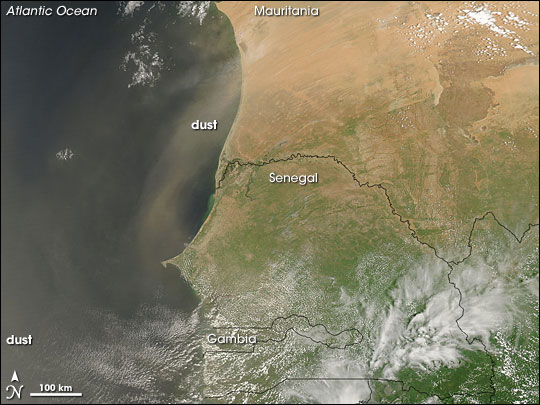 Dust blew off the coast of Africa on September 16, 2007. The Moderate Resolution Imaging Spectroradiometer (MODIS) on NASA’s Aqua satellite took this picture the same day. Likely originating from the Saharan sands in eastern or central Mauritania, the dust blew off that country’s coast toward the southwest and arced back toward land over the coast of Senegal.

In this image, the dust appears as a pale beige arc over the dark Atlantic waters. The dust is thickest near the Mauritanian coast. Southwest of the main plume is a larger but thinner plume of dust that also assumes an arc shape. This larger, more diffuse plume could result from dust that blew off the coast earlier.