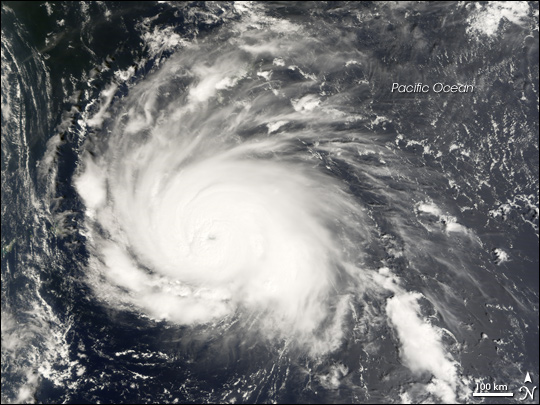 Typhoon Nari formed as a tropical storm near Okinawa on September 12, reaching typhoon strength the next day. The typhoon was forecast to swing through the East China Sea and bring stormy seas and rain to China, the Korean Peninsula, and Japan. By late in the day September 14, Nari had reached Category 4, “Super Typhoon” status, with peak winds measured at 220 kilometers per hour (135 miles per hour). However, the typhoon was out at sea, and forecasts were calling for it to lose most of its strength well before coming ashore in Japan.

The Moderate Resolution Imaging Spectroradiometer (MODIS) on NASA’s Terra satellite acquired this photo-like image at 10:50 a.m. local time (01:50 UTC) on September 14, 2007. Typhoon Nari appears here as a ball of circling clouds with a distinct, though cloudy, eye at its center. According to Unisys Weather, Nari had peak winds of around 120 km/hr (65 mph), and it was classified a Category 1 typhoon.

You can download a 250-meter-resolution KMZ file of Typhoon Nari suitable for use with Google Earth.

Typhoon Nari formed as a tropical storm near Okinawa Island on September 12, developing to typhoon strength the next day.

Though still a tropical storm, Molave’s shape is distinctive in this image. Clouds swirl around a dark depression, which marks the eye of the storm.