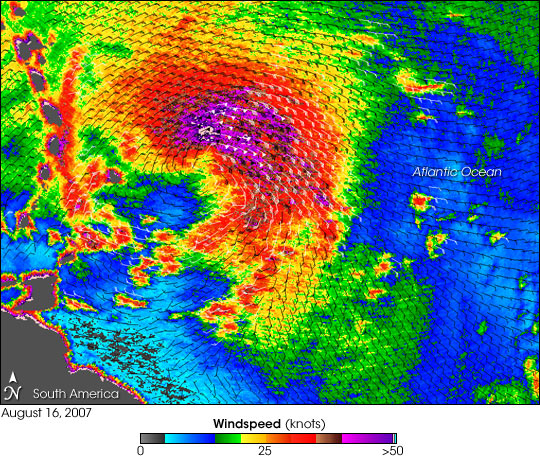 Hurricane Dean was the first hurricane of the 2007 Atlantic Hurricane Season. The storm system formed off the coast of South America on August 13. It traveled west, building strength from the warm waters as it headed towards the South American coast and the southern arc of the Caribbean Islands. By August 17, it had grown in power to become a Category 3 hurricane, and forecasters were calling for it to potentially gain yet more strength as it passed over the warm waters of the Caribbean Sea.

Dean was projected to cause major damage. Mexican authorities, according to news sources, were warning residents in the Yucatan Peninsula of the danger of the coming storm, which was projected to strike the peninsula. The storm might also brush against the islands of Hispaniola, Jamaica, and Cuba among others. Some forecasters were concerned about the possibility of Dean developing into super storm in the Gulf of Mexico, where storm surge and waves as well as winds might pose significant dangers to the oil and gas platforms.

This data visualization of the hurricane shows observations from the QuikSCAT satellite on August 16, 2007, at 6:55 p.m. local time (21:55 UTC). At this time, Dean was poised to cross the Windward Islands of the Caribbean, while grazing the coast of Venezuela on the South American mainland. Peak winds were around 160 kilometers per hour (100 miles per hour; 85 knots) at this time, according to Unisys Weather’s Hurricane information page, making Dean a Category 2 hurricane. The image depicts wind speed in color and wind direction with small barbs. White barbs point to areas of heavy rain.

QuikSCAT measurements of the wind strength of Hurricane Dean and other tropical cyclones can be slower than actual wind speeds. QuikSCAT’s scatterometer sends pulses of microwave energy through the atmosphere to the ocean surface and measures the energy that bounces back from the wind-roughened surface. The energy of the microwave pulses changes depending on wind speed and direction.