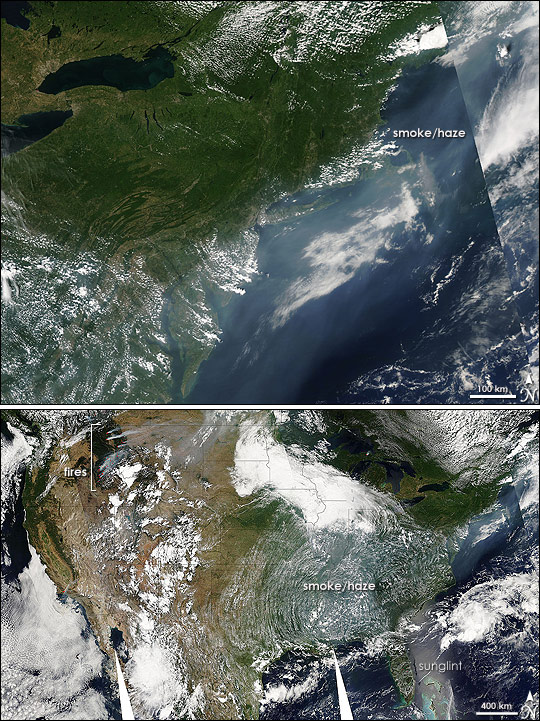 Some things are so large that the perspective from space is necessary to appreciate them. One of those things is the long-distance impact that pollutants like smoke or dust can have on air quality. On August 4, 2007, for example, fires raging in Montana and Idaho polluted the air over much of the United States. The Moderate Resolution Imaging Spectroradiometer (MODIS) onboard NASA’s Aqua satellite captured this image of the smoke and fires on the afternoon of August 4. The lower image is a mosaic of four separate flyovers (separated by faint diagonal lines), while the top image is a close-up view of the smoke and haze along the northeastern seaboard.

Strong winds on August 4 created uncontrollable firestorms that forced the evacuation of at least two communities in Montana, reported the Missoulian. Fires in Montana and Idaho are marked with red dots in the lower image and are more clearly visible in the large image. In addition to fueling the flames, the winds blew dense plumes of smoke northeast. The thickest plumes rise from the fires in northwestern Montana. By the time the smoke reached eastern Montana, the plumes were no longer distinct. The air was clouded with a soupy, gray haze that curves north into Canada. High-level winds pushed the smoke south over the western Great Lakes, and into the central and southern United States. From the bank of clouds over Illinois to the Gulf of Mexico, the air was white-gray with haze.

From the central United States, the plume of pollution snaked over the Mid-Atlantic States and the Chesapeake Bay to the Atlantic Ocean, where it turned north and flowed along the coast. Some additional haze may line the coast south of Cape Hatteras, but reflected sunlight has turned the ocean’s surface into a mirror, effectively masking the presence of any haze.

The top image provides a closer view of the haze over the Atlantic Ocean from the Delmarva Peninsula along the eastern shore of the Chesapeake Bay, to the Gulf of Maine, north of Cape Cod. By this point, smoke from the western wildfires is probably only one component of the haze. High temperatures and stagnant air also amplified the impact of urban pollution, creating Code Orange air quality conditions, which are unhealthy for sensitive groups such as active children or adults or individuals with respiratory ailments. The jetstream—the fast-moving, high-level winds that steer weather systems—is defined by the stark boundary between the hazy air over the Mid-Atlantic and the clear air over New England. Jetstream winds are clearly blocking the smoke from traveling north.

NASA image courtesy the MODIS Rapid Response Team at NASA GSFC, which provides daily images of the United States in a clickable map.

Fires raging in Idaho and Montana combined with summer haze to pollute the skies over much of the United States in August 2007.

Haze over the Gulf of Mexico

This true-color image from April 12, 2009, shows multiple smoke plumes blowing northward off the Yucatán Peninsula and over the Gulf of Mexico.