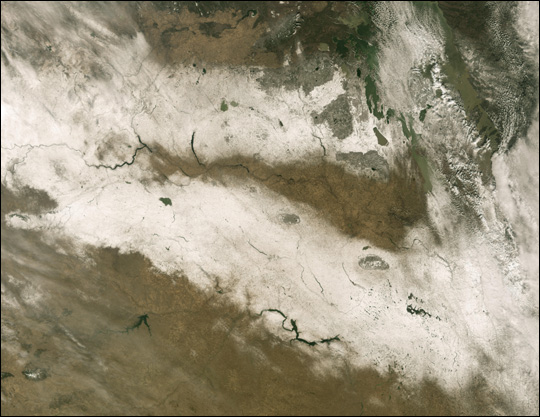 A strong winter storm swept across the Northern Great Plains on October 24, 2001, bringing high winds, bitter cold temperatures, and heavy snowfall to much of the region. Parts of Canada, Montana, North Dakota, and Minnesota received more than a foot of snow while the Great Lakes region was pelted by hail, all driven by strong winds gusting up to 70 miles per hour. The wind chill reached as low as 7 degrees Fahrenheit below zero. Snowdrifts of up to 2 feet deep were reported in parts of North Dakota and Minnesota.

Two days later (October 26), the Moderate-resolution Imaging Spectroradiometer (MODIS), flying aboard NASA's Terra satellite, acquired this true-color image of the region hit by the storm. Note the two wide swaths of snow (white pixels) blanketing much of the Northern Great Plains. The northernmost swath of snow in Canada fell from a storm earlier in the week.

This image spans the region from Southern Saskatchewan and Manitoba in Canada, southward across North Dakota in the United States. The cities of Fargo and Grand Forks are evident in the image as gridded lighter blocks along the North Dakota/Minnesota border. Note the various darker land features evident within the snow bands indicating different vegetation, different elevations, and different land use strategies in the area.

This image was acquired via direct broadcast at the Space Science and Engineering Center, University of Wisconsin-Madison. For more information, visit http://www.ssec.wisc.edu/ and http://eosdb.ssec.wisc.edu/modisdirect/.

Snowstorm Rolls Across the U.S.

Snowstorm Rolls Across the U.S. 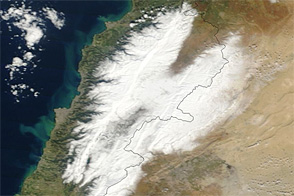