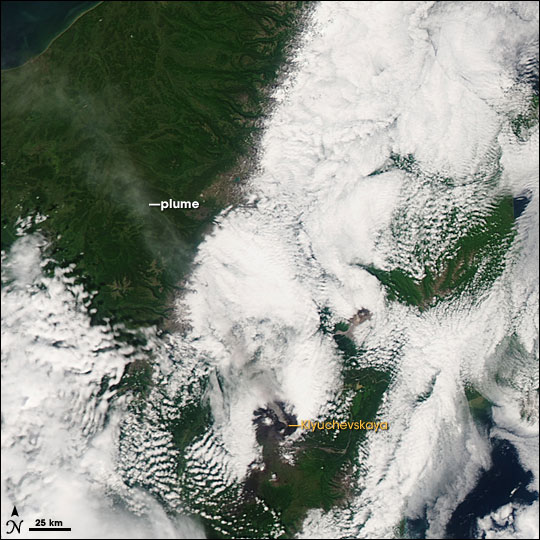 Klyuchevskaya Volcano on Russia’s Kamchatka Peninsula released another plume on July 9, 2007. The Moderate Resolution Imaging Spectroradiometer (MODIS) flying on NASA’s Aqua satellite took this picture the same day. This image shows a thin plume blowing away from the volcano’s summit toward the northwest, past a bank of thick clouds.

Klyuchevskaya (sometimes spelled Klyuchevskoy or Kliuchevskoi) is the most active volcano on the Kamchatka Peninsula. With an altitude of 4,835 meters (15,863 feet), it is also the peninsula’s highest volcano. As part of the Pacific “Ring of Fire,” Kamchatka experiences regular seismic activity as the Pacific Plate slides below other tectonic plates in the Earth’s crust. Since its formation some 6,000 years ago, Klyuchevskaya has seen few periods of inactivity, and the volcano is estimated to have experienced more than 100 flank eruptions in the past 3,000 years.

The Klyuchevskaya Volcano on Russia’s Kamchatka Peninsula released a plume of ash in early December 2008.