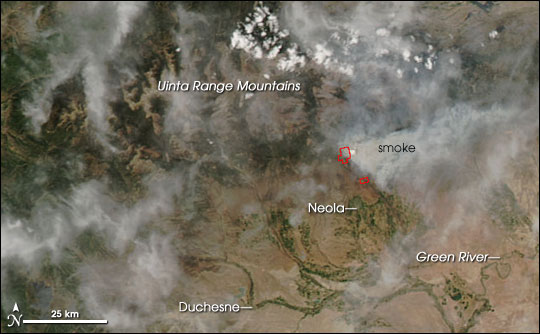 “Extreme fire behavior with crowning and spotting” is how the National Interagency Fire Center report from Monday, July 2, 2007, described the Neola North Fire in eastern Utah. Crowning means the fire has moved from the surface into the tops of the trees and may be spreading through the forest canopy independently of the surface fire. Spotting means that burning embers, branches, or leaves are being carried by the wind and setting off fires at a distance from the main blaze. The fire only began on Friday, June 29, but had grown to more than 30,000 acres as of Monday.

This image of the fire was captured on July 1, 2007, by the Moderate Resolution Imaging Spectroradiometer (MODIS) on NASA’s Aqua satellite. Places where MODIS detected actively burning fire are outlined in red. The fire is burning along the Uinta River where it flows out of the Uinta Range Mountains toward the Green River. In the eastern part of the image, clouds mingle with thick smoke pouring from the fire.

The bright green webs of vegetation that weave among the rivers flowing out of the mountains indicate agricultural lands. Surrounding natural landscapes are dry, mostly grass and shrublands, appearing tan. Though snow-covered in winter, the peaks of the Uinta Range are exposed rock in this summer scene, with deep green forests at lower elevations. Some National Forests in the mountains have been closed to the public, and small communities in the area have been evacuated.