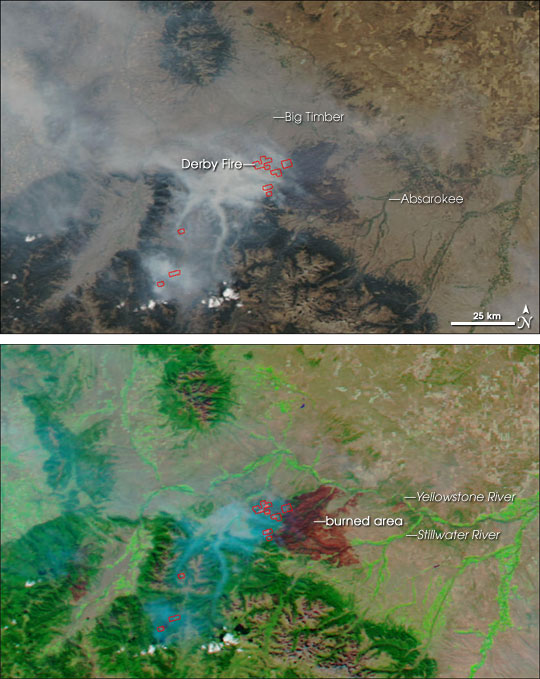 Over the Labor Day weekend, a large fire burning in southern Montana forced hundreds of people to evacuate from their homes. The Derby Fire had scorched about 178,400 acres between the towns of Big Timber and Absarokee as of September 5, 2006, according to the daily report from the National Interagency Fire Center. This pair of images of the fire was captured by the Moderate Resolution Imaging Spectroradiometer (MODIS) on NASA’s Aqua satellite on September 4. The upper image is shown in photo-like, natural color, while the lower image has been enhanced with MODIS’ observations of shortwave and near-infrared light to increase the contrast between unburned vegetation (bright green) and burned areas (deep red).

The fire is burning between the foothills of the Absaroka Range Mountains and the Yellowstone River. (Interstate 90 follows the Yellowstone in this part of the state.) The blaze burned over the Stillwater River, but as of the time of this image, the fire appeared to be most active (red perimeters) on its northwestern flank. The fire was about 25 percent contained.

The high-resolution image provided above has a spatial resolution of 250 meters per pixel. The MODIS Rapid Response System provides images of a wider area at additional resolutions.