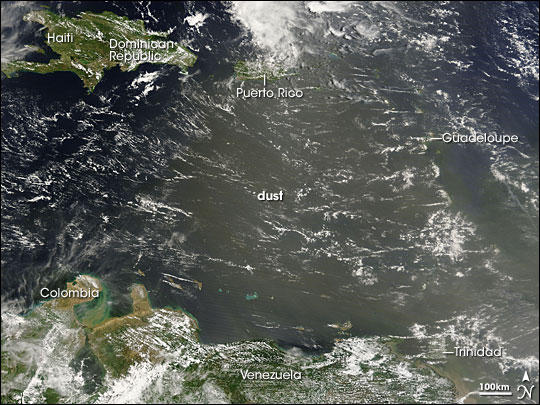 The Saharan dust plume that departed Africa on June 22, 2007, was hovering over the Caribbean Sea five days later. The Moderate Resolution Imaging Spectroradiometer (MODIS) on NASA’s Terra satellite took this picture on June 27, 2007. In this image, the dust appears as a very thin veil of brownish haze over the ocean.

Saharan dust blew off the west coast of Africa and over Cape Verde on June 22, 2007, continuing a pattern of dust storm activity for the second consecutive day. Two days after the dust storm began, satellites tracked the plume's progress westward across the Atlantic Ocean.