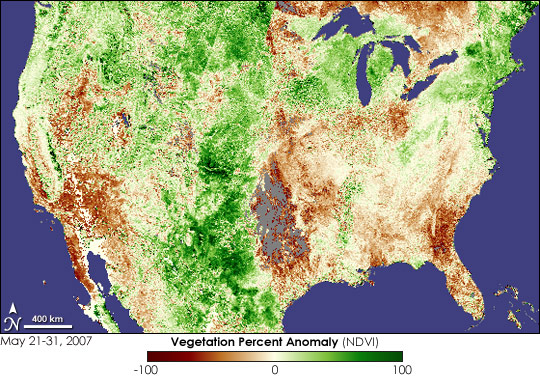 This vegetation index image shows patterns of plant growth across the United States for the last ten days of May 2007 compared to average conditions during the same period from 2000 through 2006. A splash of green up the nation’s interior points to abundant, fast-growing vegetation, while brown on both coasts indicates more sparse vegetation than average. Early May treated the Midwestern United States from Texas to North Dakota to heavy, even excessive, rain. The rain brought floods, but it also spurred plant growth, as this image shows.

Conditions on both the East and West Coasts of the United States are less rosy. Here, drought has limited plant growth, particular in the south. Dark red-brown dominates in southern California in the west and Florida, Georgia, North and South Carolina in the east. The dry conditions indicated in this image gave rise to extensive wildfires in California, Georgia, and Florida. The image was made from data collected by the Advanced Very High Resolution Radiometer (AVHRR) and processed by the Global Inventory Modeling & Mapping Studies (GIMMS) Group at Goddard Space Flight Center. Grey areas indicate that the satellite was unable to collect valid data, probably because of cloud cover throughout the period.

For current information about drought conditions in the United States, please see the U.S. Drought Monitor produced by the National Drought Mitigation Center.

By the end of May 2007, drought had set in over both the southeastern and the southwestern United States, while excess rain fell in the interior. This vegetation index image reflects plant growth in response to the drought and rain.