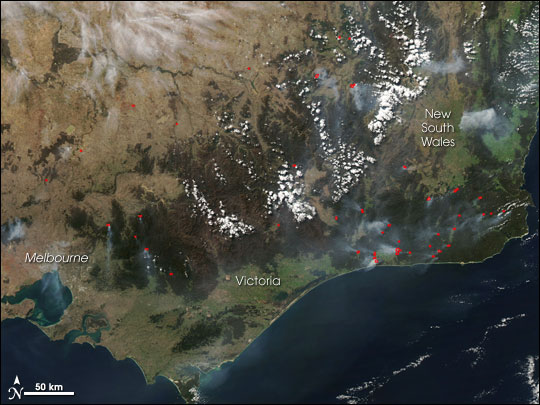 On April 13, 2007, the Moderate Resolution Imaging Spectroradiometer (MODIS) on NASA’s Aqua satellite captured this image of multiple fires burning in southeastern Australia, in the states of Victoria and New South Wales. Locations of active fires are marked in red. According to information from Victoria’s Department of Sustainability and Environment, fires across the region were a mixture of managed fires to reduce fuel loads (dry vegetation) as well as bushfires.

The large image provided above has a spatial resolution (level of detail) of 250 meters per pixel. The MODIS Rapid Response Team provides twice-daily images of the region in additional resolutions and formats, including an infrared-enhanced “false-color” version that highlights burned areas.