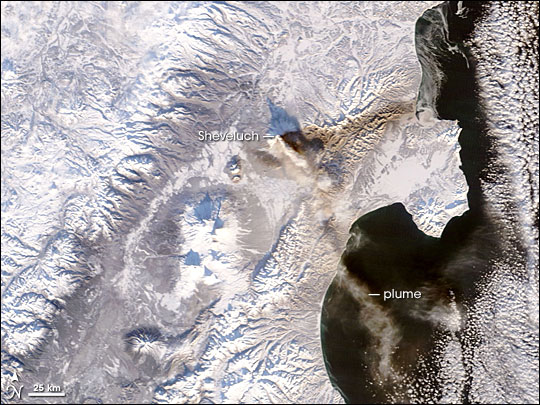 On December 27, 2006, the Sheveluch (or Shiveluch) Volcano on the Kamchatka Peninsula in eastern Russia released a plume. The Moderate Resolution Imaging Spectroradiometer (MODIS) flying onboard NASA’s Terra satellite took this picture the same day. In this image, the plume blows toward the southeast, over the ocean. Over land, the plume barely contrasts with the icy landscape. Also contrasting with the icy whiteness is a brownish streak running from the volcano’s summit eastward toward the coast. This streak is likely a remnant of recent volcanic activity.

Sheveluch is one of the most active volcanoes in Kamchatka. It is a stratovolcano consisting of alternating layers of hardened ash, lava, and rock.

A 250-meter-resolution KMZ file of the Shiveluch volcano is available for use with Google Earth. 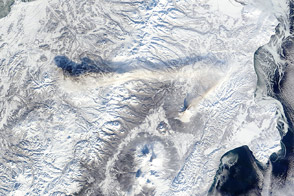 An ash plume from Shiveluch Volcano cast a dark shadow on the snow-covered Kamchatka Peninsula.