Dust Storm over the Sahara 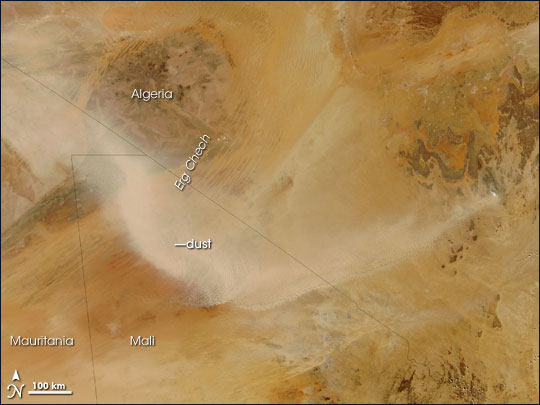 Sand seas, also known as ergs, litter the surface of the Sahara, and these ergs provide ample material for dust storms. This was the case in early October 2006, as a Saharan dust storm crossed the borders between Mauritania, Mali, and Algeria. A sand sea named Erg Chech extends from northern Mali into Algeria, and this sand sea may have provided some of the material for this dust storm. Some of the dust, however, might have originated from other sand seas in the region.

The Moderate Resolution Imaging Spectroradiometer (MODIS) on NASA’s Aqua satellite took this picture on October 6, 2006. In this image, the dust appears as a pale beige swirl sweeping through the image in a counter-clockwise direction. Although the storm appears to originate in Mauritania, it also appears to pick up material in northern Mali before moving northeast into Algeria. 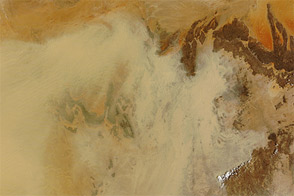 Dust Storm in the Sahara

Acquired July 10, 2011, this natural-color image shows a dust storm blowing through parts of Algeria and Mali. 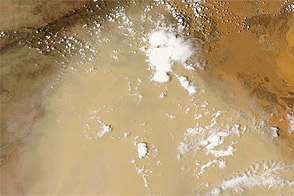