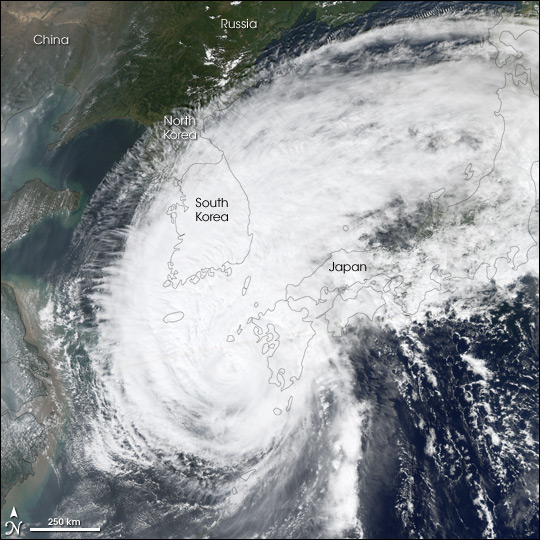 Typhoon Shanshan formed on September 10, 2006, in the western Pacific off the coast of the Philippine Islands. Over the course of the next 36 hours, it grew from a tropical depression (area of low air pressure) to a typhoon, reaching Category 4 strength as it passed Taiwan on September 15. Typhoon Shanshan stayed at Category 4 (a Super Typhoon) for two days, starting to subside only late in the day on September 16. As of September 19, the typhoon was projected to pass on a northeasterly track through the straits between the Korean Peninsula and southern Japan, and to curve east to cross Hokkaido.

This photo-like image was acquired by the Moderate Resolution Imaging Spectroradiometer (MODIS) on the Aqua satellite on September 18, 2006, at 1:25 p.m. local time (04:25 UTC). Shanshan at the time of this image had a well-defined spiral shape, with a distinct but cloud-filled (“closed”) eye. Shanshan had sustained winds of around 140 kilometers per hour (85 miles per hour) at the time this satellite image was acquired, according to the University of Hawaii’s Tropical Storm Information Center. Though no longer a super typhoon by this time, Agence France Presse reported nine deaths in southern Japan attributed to the storm, as well at least 310 injuries, and one person missing. Risks for landslides, flooding, and strong storm surge along the western coast were expected to remain high as the storm traveled near the western coastline.

Typhoon Shanshan formed on September 10, 2006, in the western Pacific well off the coast of the Philippine Islands. Over the course of the next 36 hours, it grew from a tropical depression to a typhoon.

The storm was expected to intensify significantly and might make landfall on the Japanese mainland.