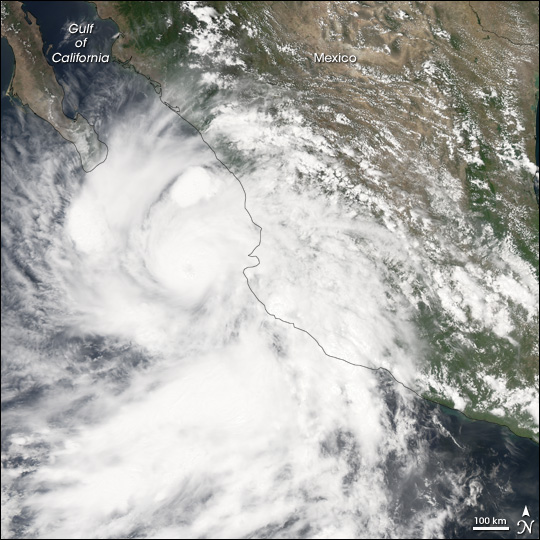 As of September 1, 2006, Hurricane John had been lashing Mexico’s Pacific coast for several days. The storm system center remained offshore, and forecasts predicted that it would only briefly come ashore as it clipped the southern tip of Mexico’s Baja California on its track up the Pacific coast. It is unusual for an eastern Pacific hurricane to come ashore without breaking apart into a lesser storm system because of prevailing wind patterns and cold water upwelling along the coast. Hurricane John, however, managed to run parallel to the Mexico coast for several days. The most powerful hurricane-force winds were not over land, but the Category Four hurricane was large enough to bring strong winds and heavy surf to the coastal areas.

This photo-like image was acquired by the Moderate Resolution Imaging Spectroradiometer (MODIS) on the Aqua satellite on August 31, 2006, at 2:10 p.m. local time (20:10 UTC). Hurricane John at the time of this image had a well-defined if widespread shape, spiral-arm structure, and a cloud-filled (“closed”) eye. Hurricane John had sustained winds of around 165 kilometers per hour (105 miles per hour) at the time this satellite image was acquired, according to the University of Hawaii’s Tropical Storm Information Center. This stregnth was somewhat less powerful than two days earlier when Category 4-strength winds were measured in the central parts of the hurricane.