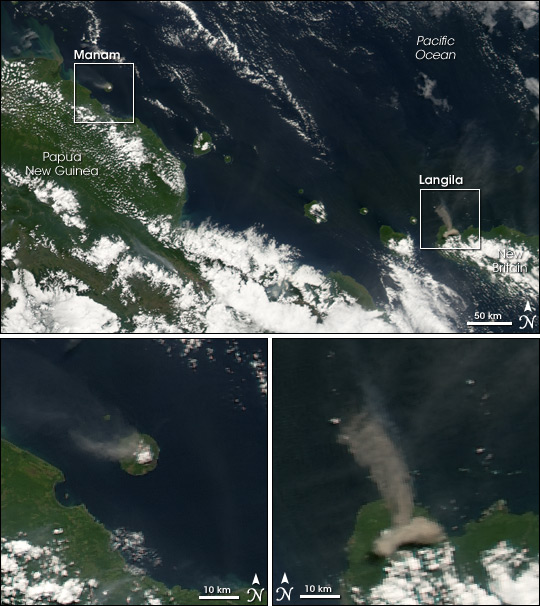 On August 9, 2006, two volcanoes in the region of Papua New Guinea emitted plumes at the same time. The Moderate Resolution Imaging Spectroradiometer (MODIS) on NASA’s Aqua satellite managed to catch both volcanoes in the act. The top image shows the larger region with each volcano emitting a modest plume. An enlarged picture of Manam Volcano appears at lower left, and an enlarged picture of Langila Volcano appears at lower right. In both cases, the volcanic plume is easily distinguished from the nearby clouds by its gray-beige color. Both plumes blow toward the northwest.

Just north of mainland Papua New Guinea, Manam Volcano occupies an island just 10 kilometers wide. Its summit sports two craters, and historical eruptions have been observed there since the 17th century. It remains one of Papua New Guinea’s most active volcanoes. On the western end of the island of New Britain, Langila Volcano is one of that island’s most active volcanoes. The volcano actually consists of four overlapping cones. Recorded eruptions have occurred at Langila since the 19th century.