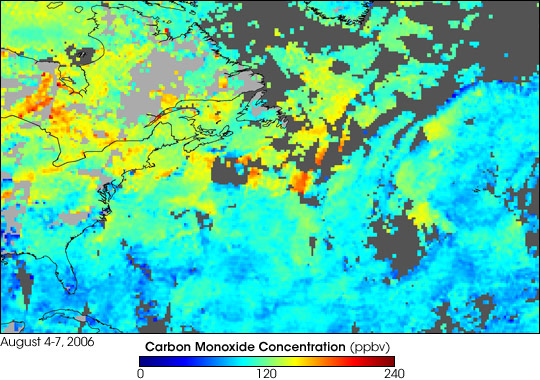 Thick haze streamed from North America out over the North Atlantic Ocean between August 4 and August 7, 2006. In the previous days, extremely hot temperatures, high humidity, and stagnant air caused haze to build up over the heavily populated U.S. East Coast. The Environmental Protection Agency issued warnings as air quality dropped to unhealthy levels. By August 4, the air over the land began to clear, and the haze blew out to sea.

This image, generated from data collected by the Measurements of Pollution in the Troposphere (MOPITT) sensor on NASA’s Terra satellite, tracks the cloud of haze across the Atlantic. The image shows carbon monoxide, a gas emitted in engine exhaust from the incomplete combustion of fossil fuel. Carbon monoxide is also a component of smoke. The concentration of carbon monoxide is shown as ppbv, which stands for “parts per billion by volume.” A measurement of 240 parts per billion by volume means that for every billion molecules in a volume of air, 240 of them will be carbon monoxide. Highest levels are shown in red, and lowest levels are shown in blue. Places where the sensor did not make measurements, probably because of clouds, are gray.

Most of the carbon monoxide over the Atlantic is probably from the haze that had built over the East Coast, but some may be coming from fires in Canada. A few red dots over Canada indicate a point source where fires are releasing the gas.

Air quality dropped when a heat wave trapped pollution over many cities along the east coast of the United States in early August 2006.

Haze over the Atlantic Seaboard