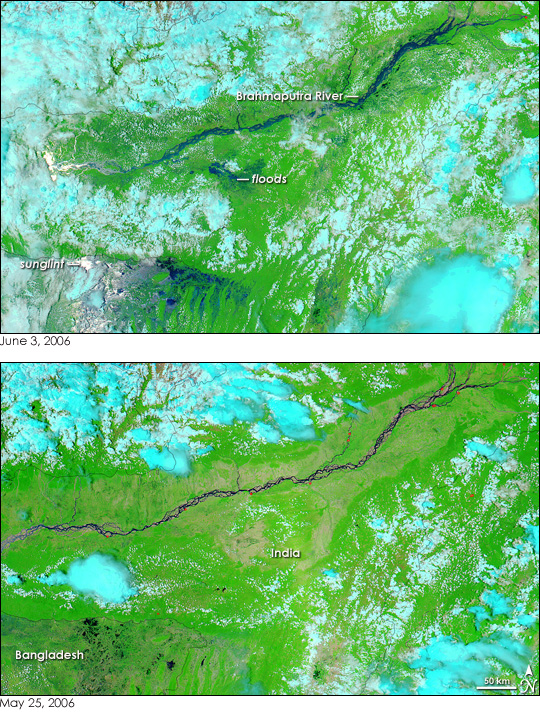 June normally marks the beginning of the monsoon season in India, but early rains triggered floods in northeastern India earlier than normal. According to news reports, 25,000 people were displaced in India’s Assam state when the Brahmaputra River burst its banks in early June. When the Moderate Resolution Imaging Spectroradiometer (MODIS) on NASA’s Aqua satellite captured the top image on June 3, 2006, the river was already swollen with a week’s worth of monsoon rains. To the south of the river, water puddles in low-lying regions and runs in streaks down the Khasi Hills near the border with Bangladesh. Additional flooding may be occurring in Bangladesh, but the Sun’s reflection masks the surface in a silvery mirror called sunglint. Clouds, light blue and white in these images, also hide some of the floods from view.

The lower image shows Assam, India, and eastern Bangladesh a little over a week earlier, before the monsoon rains set in. The river is dry-season thin as it snakes through its bed, which is tan from being scoured of most or all plants during the seasonal floods. Red dots along the river show where MODIS detected several fires.

The annual monsoon floods swept across India beginning in June 2006 after the summer monsoon got an early start.